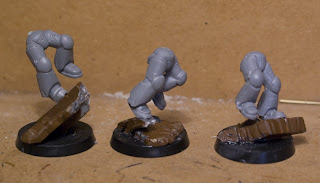 So, I've just dropped the wife off at the station – three days away at a conference – a brief reprieve from the eternal list of jobs that haunts me and some quality painting time with my war film dvds as company. Except I've run out of red paint!!

Can't really paint a Blood Angels army without Blood Red paint. I can't get to the (GW) shop until tomorrow, so am having to do my best. I have turned my attention to the absent four members of the Assault squad that will accompany my Vet Serg.

He was the first step in addressing issues raised in my rant the other week about the poor quality (or rather passive demeanour) of model poses within the 40k range (I'm talking specifically marines). So I thought I'd get some action snap shots going with the rest of my Assault boys – see above photo as the starter.

Since writing that rant I have been keeping my eye out, on my daily trawl of the net, for models with dynamic poses. I came across the following website for Infinity – go have a look in the gallery if you have the time.

Whilst not all the poses could be considered dynamic, there is a good range, and they all seem appropriate to the role of the model in question. So my plan is to get my assault troops looking like they're in the middle of an assault, not waiting before the fight starts or catching their breath after the action.

(Must remember to buy TWO pots of red paint tomorrow!)
Posted by The Dark Templar