So after a wobbly start I've pinned my flag to the Butcher's goal and sit here patiently waiting for a parcel to arrive so I can get stuck in.

Doing some required reading the Butcher's seem to be the Orks of Guild Ball. They're the Bezerkers, the big hitters. They get most of their Momentum Points from hurting opposition characters – it's all about the damage. 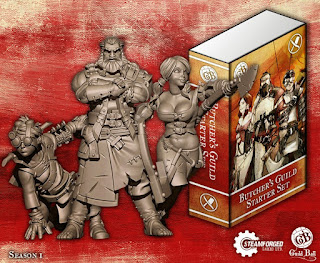 I'm lucky in that the starter set for the Butchers seems to consist of some pretty solid characters. The captain Ox seems very solid, with TAC 7 which means lots of hits. He also has a couple of auras that increase damage inflicted by nearby friendly models. Brisket, the striker, has a wicked 6" kick that can be increased to 8" with one of her abilities. Then young Boiler seems quick on his feet able to inflict some hit and run style damage. 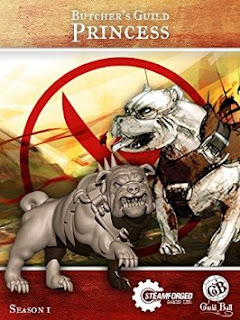 But not satisfied with what comes in the box I added a couple of other models to the roster. Princess is the team mascot and seems to have a lot of affinity with both Brisket and Boiler. The Butcher's dog also seems very capable of dishing out damage so that's great. 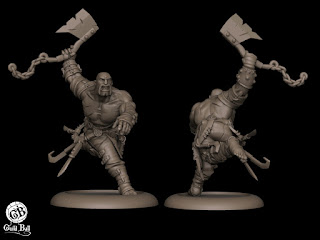 Then there's the big man. Most teams have one but this guy is just rude. Boar is the b@$tard child of Santiago Ortega (from Malifaux) and a Khorne Bezerker. He just loves handing out the hurt in box loads, gets mad like the Hulk, and when he gets damaged he regenerates. Plus that model is amazing.

So I have to say expectations are rising the more I read about my team. I won't have enough for a full team (once we move on to 6 players) and the jury is out on the other Butcher's players Shank and Meathook. I may have to look at a Union player to fill the gap, but that is some way off.

Tick tock, tick tock.
Where is that Parcelforce van?