Painting Lord Of The RIngs Undead 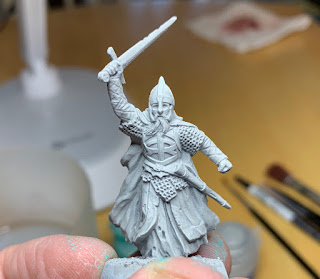 So my painting exploits. limited as they are, have settled upon my Lord of the Rings models. I've got some base colours down on the Uruk-Hai and even pulled apart the Mordor Troll to turn him into an Isengard Troll instead, but that's for another post.

As an aside from all that brown paint, I decided to have a go at the Army of Undead… or at least the first ten models. They were sprayed with GW … White spray (which is actually light grey, and a pig to use at it leave bobbles on your models if the temperature is not optimum) then I touched up the undercoat with Administratum Grey (above). Then came the cool bit. 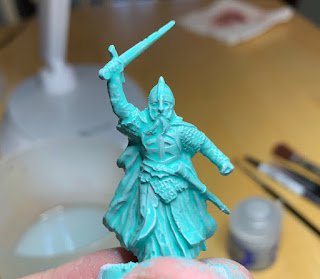 I saw a blog post somewhere a while ago (though I cannot remember where or find it for love nor money) a neat trick about using the GW technical paint Nihilakh Oxide for undead, so I thought I'd give it a go. It's quite a thin, runny paint so I put some on the palette then lathered the model in it to see what happened. Oh yes, these guys were swimming in it (quite literally when I knocked over the stupid paint pot!)

After leaving it for a while to dry I got to survey the results. 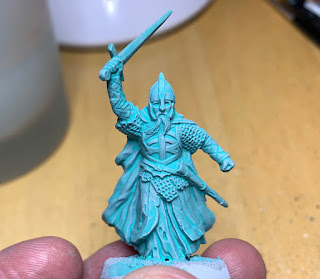 I really like where this is going. The colour in the photo is a little off as it's still quite green like the previous image, but looks good.

I suspect I should have painted the models white before applying the Technical paint as this would have made the high areas, and overall colour brighter. Having said that I'm happy to leave that for the King of the Undead to make him stand out more. 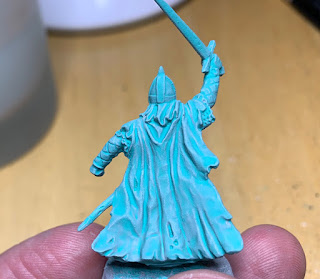 I MAY go back in with some thin white highlights along edges, but this would open the door to shading and another layer of the oxide…

I'm happy for this to be a quick win – Hurrah, I painted something!! 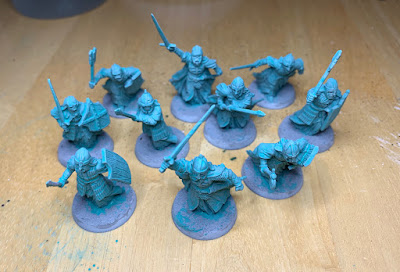 There are still another ten of these guys not yet built but I'll probably go back to my Uruk-Hai until I can order the King of the Dead to lead them. I also managed to acquire Saruman to lead my Uruks, as well as Lurtz and a couple of the Uruk Captains, but I'm in no hurry. I'm happy to have something I can post about!