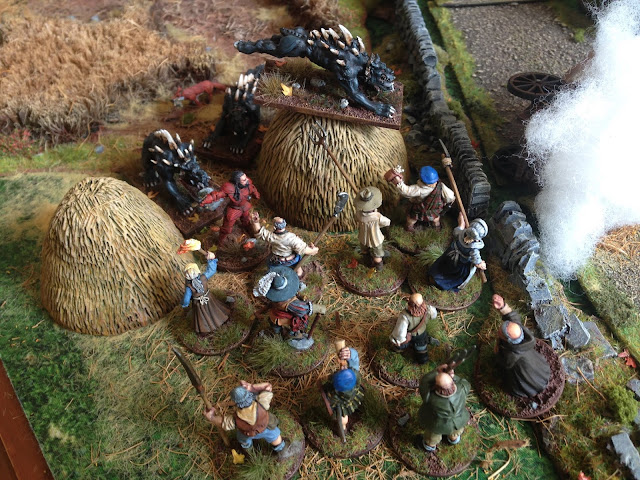 I've had almost 3 months away from the blog doing 'stuff' but felt compelled to add a random post after yet another top drawer day of gaming at Awdry Towers.

You may remember our last major outing to the Congo – Michael goes all out to construct a gaming table that sucks you into the narrative and builds the tension via email before we even leave home (and yes, we get homework!). It really is a pleasure to take part in one of Michael's adventures.

So he's been going on about doing a Witchfinder game for well over a year now, but things had stalled somewhat. When we managed to get a day booked into the diary back in June for the first Saturday in August, I suggested that Witchfinder might be a welcome change of pace. And so it came to pass.


I love the fact that Michael decided to abandon his original plan to use the Witchfinder rules he's purchased and decided to mould his game around the Donnybrook ruleset. That's the sign of a true creative mind!

Now, I'm not a fan of the old blackpowder and flouncy hats era, but Solomon Kane I can buy into, so I took a leap of faith (so to speak). The rules themselves are…odd. They use the now very common practice of using different sided dice to represent different ability levels – D6 being your recruits and D12 being your heroes.

Anyway, Michael had gone full tilt and created a raft of characters and units, very colourful and rather cleverly named, for us to use with their own rules and abilities lifted from the rulebook. Very excellent stuff.

Now, I'm not a fan of the random. I'm a bit of a control freak you see. That comes from being a tournament player for so many years where you tried to eradicate or circumnavigate random events as part of your strategy and tactics. It also comes from writing my own rules – too much random can leave the player with a feeling that they're on a passive ride with no influence on the outcome. Donnybrook flies in the face of wisdom and creates a game that is so random and chaotic you have no choice but to embrace it. You certainly can't have a serious game with these rules because you cannot have any real form of control over the outcome. Balance?…pah!

Activation is determined by drawing cards from a deck containing all of the characters and units taking part – the activation deck if you will. That's all fine, a very good mechanic. However, there is a Turn Over card in there too, and when drawn the deck is reshuffled and you start again. The outcome of this is that a single unit or character can go several times in a row, or in my case, not have a go at all for several turns. This creates an immense amount of imbalance and randomness – and that's before you throw the random event card in there too (which on one occasion sent an entire unit of Bull's troops home because they missed their families)!!

So as you can see the hilarity was never far away. Even when you were on the wrong end of the random you kind of had to smile. The big finale was a great example of this. I had finally beaten Michael's Villagers by the skin of my teeth, his last unit the Angry Mob in full flight towards the table edge. Up pops the Random Event card and attempts to drop a new unit of elite troops emerging on a flank as a relief force for the Villagers – luckily for me Michael didn't have enough models to fulfil the criteria, so it turned out to be travelling performers instead, else I would have snatched defeat from the jaws of victory no doubt.


Needless to say, we had a fab time. We played three games during the day – same scenario – which meant we each got a couple of goes playing as well as a go being the dealer and overall games master.

In the first game my Villagers managed to hold off the advance of Bull's Cultists, despite some early losses. After lunch Michael's Villagers were swept aside by Bull's Cultists, only to be beaten again (only just) by my Cultists. So the Cultists have definitely broken through the outer defences and the village of Muchwhinging could soon become the focal point of the next skirmish.


We learned a lot about the rules and had them down by the end pretty much. We definitely missed a couple of things out, and we felt the characters were generally underpowered (aside from the doxy's stiletto heel through the chest of my vampire hero!!) but a great time was had by all.

It was such a good day that I've been inspired to create a fully immersive experience of my own for another time – stay tuned for more on that!

Bull has written up a fantastic piece about the day – read it here!