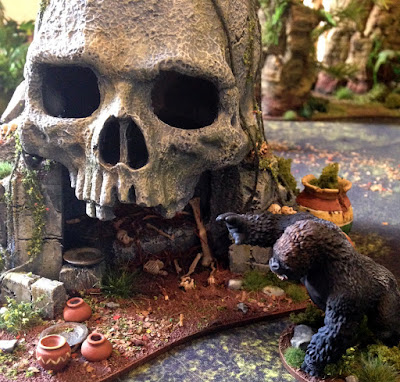 In a complete departure from the current gaming theme, we headed off to the jungle yesterday. Bull and I trundled down to the south coast to Awdry Towers to partake in a game or two of Michael's current passion project—Congo. 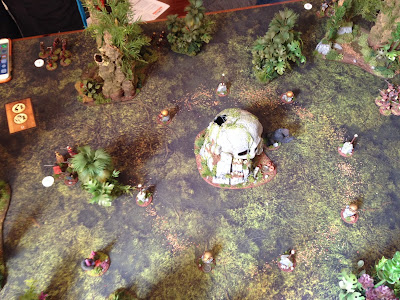 Let's start by saying that Mr Awdry had a table set up the likes of which I have only seen in rulebooks. It was exquisite. He has spent the bulk of his summer break creating terrain features and painting models for a day such as this and it was an absolute pleasure to take part. Not only did the gaming table (which included a swamp gaming mat from Deep Cut Studios) set the scene, you felt completely immersed in the adventure as you played. Kudos to Mr Awdry for what can only be described as the most professional demo game ever. I won't go into any detail about the individual terrain pieces, as Michael has a host of blog posts coming up to explain how he did it! 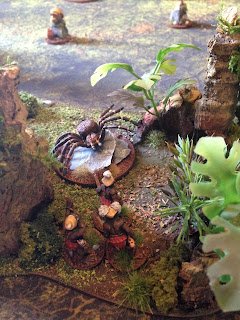 Congo, the game itself, was an unknown quantity to me going in. Michael had been kind enough to send us PDFs during the week to provide a backdrop and basic rules for the game. Alas I am not great with homework and didn't have much of a look. It didn't matter in the end as Michael explain things excellently and we were soon up and running. I won't go into too much detail about the individual games: the opening game (my Explorers vs Bull's Jungle tribes) was a landslide as I was incapable of rolling 5+ on handfuls of D10s whilst Bull was rolling 5+ on D6s at will; the second game (my now more experienced Explorers vs Michael's Jungle tribes) was a much closer affair and came down to a nail-biting 7th turn.

The ruleset has element from several different games. Players choose their actions for the turn from a handful of action cards, mimicking X-Wings dials, so decisions are made before the turn starts. These are supplemented by Totem cards which give bonuses during a turn or can be held on to for later. All dice rolls are successful on 5+, be that attacks, saves, bravery, etc. and skill levels are represented by the dice type being used—d10s for elite troops, D8 for trained troops and D6 for everyone else. It's a mechanic I've seen knocking around for a while and it does work. There are also stress tokens dished out liberally that will impede the types of actions and once this number reaches 4 you're in trouble. Given that the game comes from the Studio Tomahawk stable, the stress tokens were not surprising. I did find some aspects of the rules a little clunky, and melee combat felt a little off, but there is no denying that this is a great adventure game. We had a riotous laugh (especially Bull with his heavenly dice rolling) and came home feeling like we had actually been on some kind of expedition. The background and themes running through this game are superb. 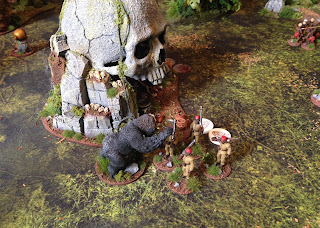 Being a rulebook geek I have a hankering to pick this one up, it is fantastic to look at. We will no doubt have more Congo adventures at Awdry Towers in the near future—I am eager to see some of the other scenarios in action as the 'Capture Kong' one we played was excellent. 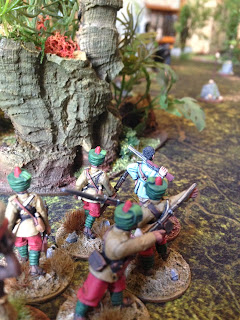 I also came away from the day inspired. This is just the kind of adventure game I've wanted 'Hood' to be, and when combined with a set of beautifully painted miniatures and a stunning gaming table it certainly has raised the bar for gaming experiences. I am now keen to create my own gaming table to a comparable level to this one—though let's be honest, Mr Awdry is in a league of his own right now!

Bull's blog has his take on our day out.