A Zombicide Start To The Weekend


I haven't played ZOmbicide Black Plague in some time. We reckon it's probably been at least six months which, considering it's our go-to game, is strange. I haven't played Green Horde since it arrived at Christmas, I only opened the box to get a look at the models up close.

That all changed this weekend.

Friday at work, being the last Friday of the month, was Free Project Friday and Team Social Afternoon. We ended up playing Zombicide Black Plague in the meeting room – an 8-player mash-up with many first timers and all the big monsters. It was fun, took a while and realised I'd forgotten a lot of the details in my absence from the game. There was lots of cheating in the end to ensure we won, but it won over a couple more admirers so no doubt more gaming in the future.


To be honest that was the warm up, because the morning after myself and Bull travelled to the now very shiny Awdry Towers to get our first taste of Zombicide Green Horde. I'd heard lots of tales about how the new version plays but you never know for sure till you try it yourself.

We managed to get through the first game with a win, but it was touch and go at the end. The game felt claustrophobic and the swaggering confidence often seen when playing Black Plague was gone. The hedge and water mechanics were good additions – don't end the game in the water end of a map, it's a nightmare. The trebuchet was awesome, though it didn't see any action in our opening game. 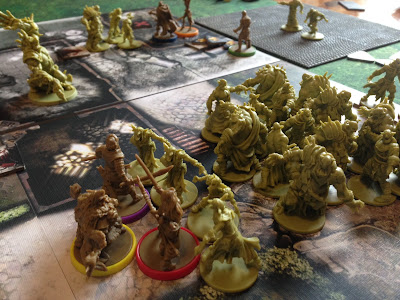 Game 2 was a challenge indeed. So much so we had to press the restart button after a few turns in as we had made some fatal mistakes in our early strategies. Take 2 was going swimmingly. We had got to the trebuchet and were pretty much owning the board. However, as we confidently headed towards a second victory, fate stepped in to slap us in the face. We ran out of runner models, meaning all runners on the board get a second go – combined with a 'runners get an extra go' card flip we were wiped out in a single turn within reach of the finish line.

Our problem was two-fold. We were using just the contents of the Green Horde starter box, so no fancy weapons and limited zombie models. It meant we didn't have the volume of dice when attacking to clear out the masses of zombie models coming at us. The majority of weapons were only hitting on a 4+ at best, so even a handful of dice was only going to get you so far.

Needless to say we all had fun and thoroughly enjoyed a re-introduction to Zombicide.
There will be more to come!