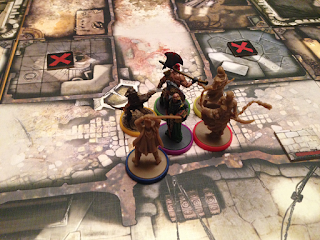 In a desperate effort to keep Tuesday Night Gaming alive this week, it became Wednesday Night Gaming instead. Bull was keen to press on with our foray into Zombicide: Black Plague, with all the cards and extra (huge!!) models from the Kickstarter.

The quest he'd chosen was ominously titled The Ambush, and it said that only 2 characters had to survive. Given that almost all the quests say that everyone must survive, this was bad news indeed. However, looking at the board and the objectives we just couldn't see what was so difficult.

It soon became apparent that the narrow corridors and spawn points in close proximity to each other would cause bottlenecks and have the Necromancers sprinting off the board faster than Usain Bolt! Our fears became reality when the first Necromancer had appeared and hoofed it away before we could take her down (the dreaded queen again). However, I'm jumping the gun a little here. 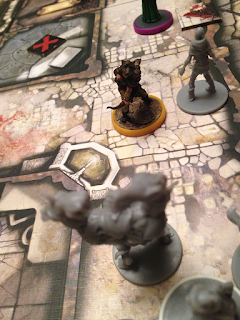 As was the case last time, Bull and I both chose a single character and the rest were handed out randomly. Bull chose melee master Redcap Rodney, and I chose my Dream Team marks(wo)man Cadence. For randoms, I got magic caster Mizar and necromancer-type Ostokar – Bull got searcher James and Lucas. They were 4 characters that I was not familiar with but the beauty of doing things randomly like this is that you start to appreciate skills you knew little about previously.

So, one Necromancer had already run off the board, we had no weapons of significance, then Redcap got caught short and died. Things looked bad by turn 3, but then (whilst we were all still blue level experience) the standard Abomination appeared! Wow, just wow! We really were in a hole, so much so even Bull was ringing out the doom and gloom. Totally against character, however, I was still very confident that the quest was doable, we just had to think before we acted and make the most of the abilities we had. 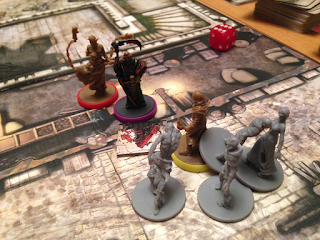 Long story short, we battled our way through by the skin of our teeth for long periods of the game. We had moments that looked forlorn, but with a bit of careful planning we created some daylight and broke through the zombie waves. We came close to losing both James and Lucas, plus Ostokar took an early bite that he carried with him for most of the game.

The key to our eventual success was the Invisibility spell, Ostokar's Zombie Link ability (giving him an extra go whenever the zombies got an extra go, and James' searching which turned up a host of nice weapons mid-game. Cadence proved to be quite a shot, earning herself the Orcish crossbow by taking out 5 NPCs, on top of the host of other kills. 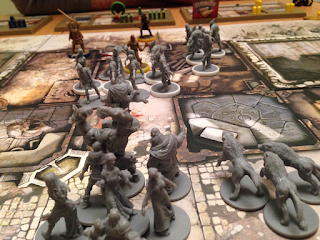 Fantastic quest that is not to be taken lightly, especially when you use the full deck with the extended collection of Necromancer special character cards. We also purposefully kept the Abomination on the board, to avoid any of the big monsters appearing. This proved vital to the win.

Next time we're going completely random for the characters. Should spice things up just a little more!

They Think It's All Over…! 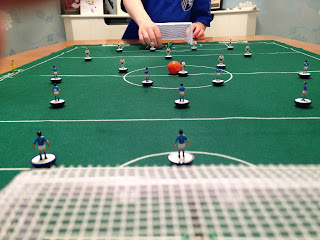 About a month ago I managed to have a game of something I've not played in 25 years… Subbuteo!

Myself and a group of friends played it for a while back around the time of the Mexico '86 world cup, and again for a spell 4 years later. I had the odd game during the early 90's whilst at college, but my collection has sat in boxes since then.

After a casual conversation about it with our friends last year, I recovered my Subbuteo teams from my mum's attic and even went so far as buying a more recent starter box. Eventually we got a date in the diary myself, our friends James and his 7yr old son Joseph had a boys' day playing table football. 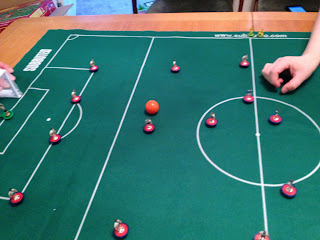 Needless to say the skills were a bit rusty, but I managed to stay unbeaten on the day, bagging a total of 6 goals in 4 games and not conceding any. Poor Joseph didn't win, or even score, on the day and was on the end of a 4-0 kicking from his dad at one point (not competitive!). After beating James 3-0 in our opening game, we ground out a 0-0 draw in the second and I eventually won by a golden goal.

Regardless of scores, great fun was had by all. Nostalgia washing over us in waves, whilst teaching a new generation a game that provided hours of fun for us oldies! 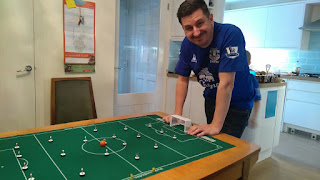 Of course, wearing your football kit is obligatory – without a word said we all turned up wearing our colours – me, in my traditional royal blue!

Posted by The Dark Templar 4 comments: 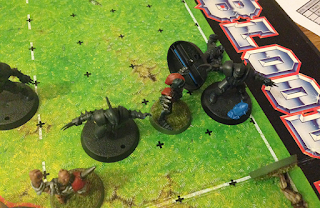 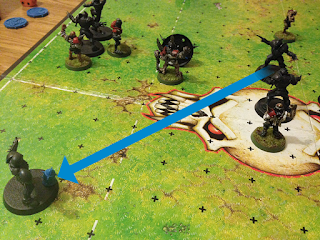 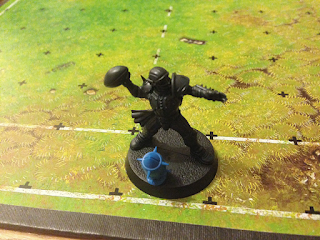 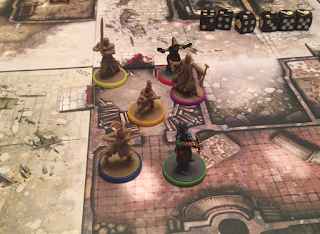 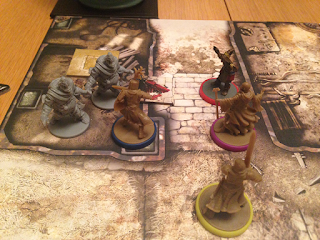 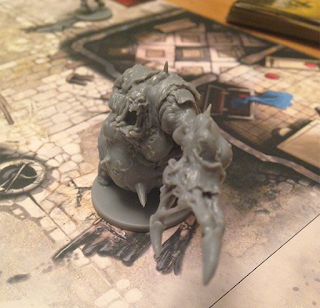