How I Paint Stormtroopers 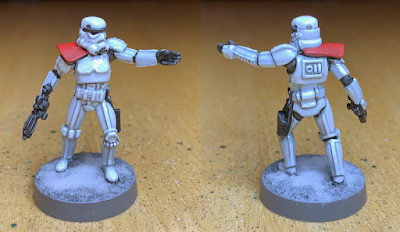 After last months game of Star Wars Legion, and the fact that my Stormtroopers looked rather pitiful, I decided to do a test model to see how I could effectively paint them. Stormtroopers should be very easy to paint but somehow have proved challenging, both for Imperial Assault and now Legion.

(Apologies for the shocking colour balance on the photos!)

Originally this leader model had been spray undercoated (poorly) with GW Corax White, which is actually more of an off-white. I found a similar paint pot and gave the model a good undercoat of Celestra Grey.

Then I got started on the White. Relatively thin consistency was applied to all the armour plates, leaving shadows and joints untouched. This continued for several layers, repainting over the armour, concentrating more and more on the highlighted areas to get a (sort of) gradual effect. I went back with a thicker white to the purest highlights to make sure it was a pure white. 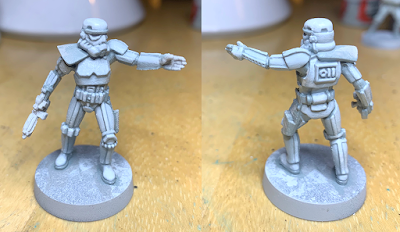 Then came the tricky bit – painting all the black elements of the under armour, vents, etc. These we highlighted with sparing amounts of Mechanics Standard Grey then a tiny bit of Administratum Grey. Once dry it was washed back with some thinned Nuln Oil, which was also used on some of the deeper recesses in the armour.

The red shoulder pad was base coated in Khorne Red and highlighted with Mephiston Red. 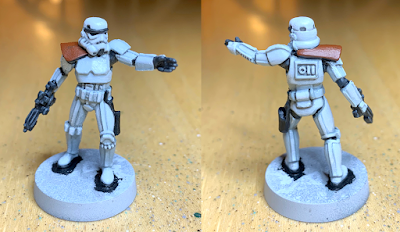 Content that this was complete. I covered the base in Astrogranite Debris, highlighting with Dawnstone and Administratum Grey. I then daubed a mix of snow flock and PVA to a large proportion of the base (my Hoth theme) and left it for 24hrs to dry.

To finish, I gave the whole model a matt spray varnish then went back in and brushed on gloss varnish to the armour plates. 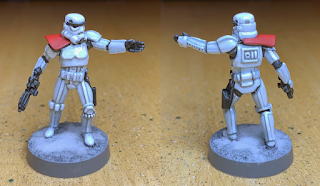 Overall I'm pretty pleased with how he came out, although it took an age – an hour or so per evening over a large part of the working week. Not sure how practical that is for the remaining three squads, but I'm prepared to put more effort into the leaders, so I'll continue with those first. 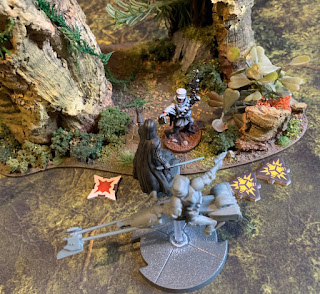 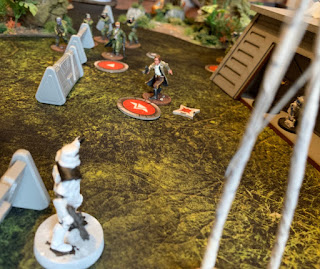 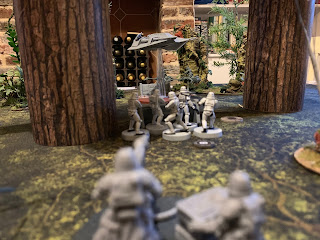 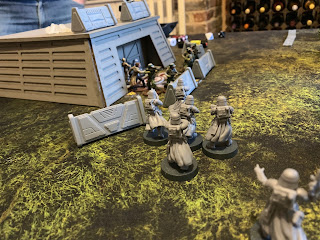