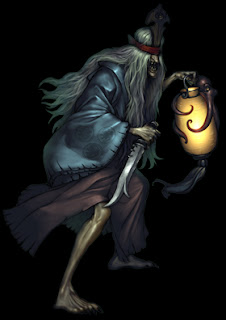 I've learned a lot in the last couple of games with Kirai (apologies for those not into her Spiritness but it's going to be the theme for the coming weeks I'm afraid).

Hands down star of the show so far has been Shikome – fast movement, solid on offense with some nice tricks and triggers, plus manages to hold on when attacked (if not just summon a new one!).

Datsu-ba on the other hand is yet to find her place. I've read a lot of blogs/forums with people raving about her so I'm probably not seeing it yet. She has a lot of potential so I'm loathed to drop her from the starting lineup (plus I can't summon her in). After a few days of contemplation I've decided to try something a little different for her.

In the opening turn or two I've been activating and passing (usually) with my Seishin and totem to out activate Fug, and then summon all the big hitters in at the end of turn knowing there are no reprisals to come this turn. Datsu usually spends this time lounging around with not much to do, so I've decided to give her a job.

Based upon a trick for Sonnia Criid that I learned from Bill at Dead Tau Project – using Desperate Mecenaries in your starting lineup to then kill and summon more expensive Witchling Stalkers – I'm going to drop a Seishin from the starting list and replace with a Desperate Merc (same points cost).

On turn one Datsu goes to town on the Merc and finishes him off with her funky spell that (if it kills the target) turns them into a Gaki or even an Onryo with the trigger. Making sure this happens within 8" of Kirai means that I lose a Merc, gets turned into a Gaki with a corpse counter in the pocket, and Kirai gains Seishin number 5. This basically means I get two (low priced) models for the price of one and will take my crew count up to 10 before summoning Ikiryo or Shikome.

I also intend including The Hanged for the first time to see what he can do. I may take some photos this week, although I warn you now there are no painted models…yet.
Posted by The Dark Templar