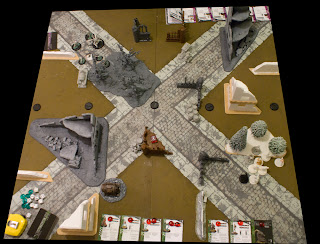 This is a question that has been in my mind since starting Malifaux. With Necromunda back in the day you had the terrain provided for you and that was pretty much that. When we first started playing Malifaux we had very little appropriate scenery to use, so the early games were quite sparse and led to ranged experts such as the Convict Gunslinger ruling the roost.

As time has crept by and our terrain collection has expanded, we've seen the table get more and more crowded, to the point I'm wondering is there too much terrain on the table now? The photo of Tuesday night's game above is actually quite open by our standards.

Scouting around blogdom on a daily basis you see photos now and again of other people's games and gaming tables. Above is a photo from Bill's DeadTau Project blog, below a photo from Sholto's Incunabulog. Both tables have significantly less terrain than our own weekly layout, with some quite open spaces with nowhere to hide. 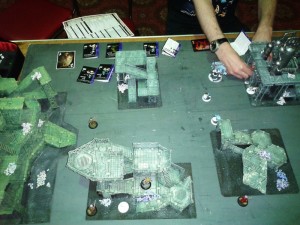 So I'm going to throw the question out to you viewing folks – how much terrain do you use?
Posted by The Dark Templar