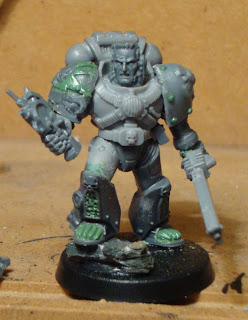 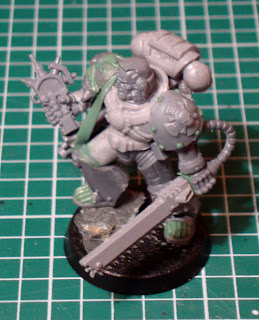 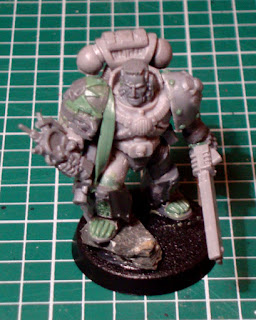 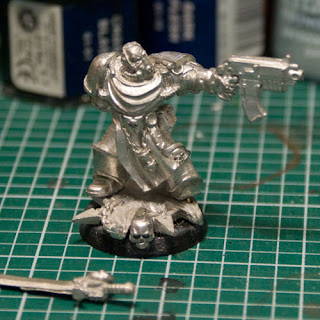 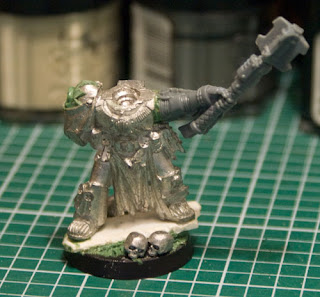 Before I get stuck into that mammoth task I shall complete my first Dark Templar Chaplain. At present he has no name, but is already taking shape. In true DT tradition he has no aquillas on his armour, so he wields a mace rather than the usual crozius (same outcome in gaming terms). I shall be borrowing ideas from Ron's skull helmet tutorial for his head, or I may try to emulate the LotD skull beaky helmet – I haven't decided yet. He already has his DT symbol on his shoulder (albeit largely covered by the parchment) – his other shoulder will be a massive skull which I'm looking forward to sculpting.
Posted by The Dark Templar No comments: 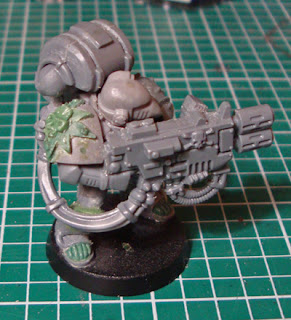 After the text heavy posts this week I thought it only right to have some mini images today. This is the second Dark Templar model so far. 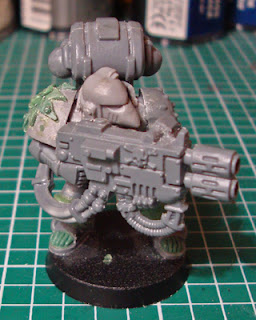 Sculpted icon on shoulder again – skull is a bit skewed but I will be covering that in another post soon. I replaced the green stuff 'feet' as I wasn't happy with the originals. 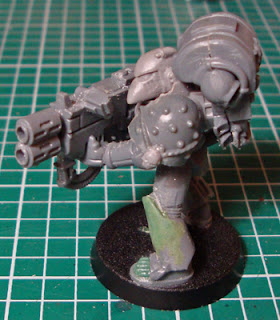 He's pretty much good to go, but I want to add something else, probably GS purity seals, to his left leg just to move things on a little from the original test model last week. Hopefully this guy will see some paint on Sunday.
Posted by The Dark Templar No comments: 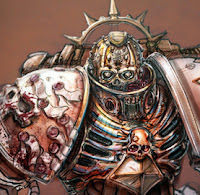 (Chaplain image by pabelbilly, used without permission)
Posted by The Dark Templar No comments: 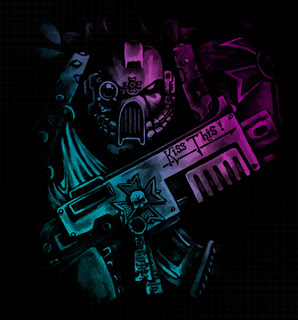 The now Dark Templar had a new look and a new mandate – to survive by any means and destroy those who had brought this shame and destruction. They would be retribution incarnate and death would follow them.
Posted by The Dark Templar No comments: 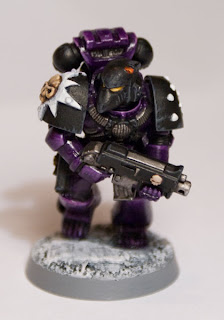 So finally I can reveal my benchmark Dark Templar marine. He is actually my third test piece, the first being an original RTB01 plastic and the second being a rogue trader metal marine. I'm pretty happy with this guy, given the brief amount of time spent painting him (compared to my recent Blood Angels). The purple is a little shiny at the moment – went a little crazy with the ink wash – but hopefully a matt varnish will resolve that issue. 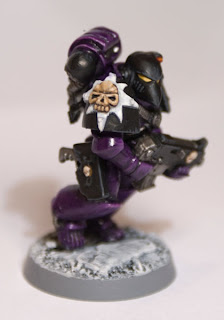 THE COLOUR SCHEME...
As you can see the basis for the armour is purple body and black shoulders and helmet. The idea is that the more experienced you become the more black armour you are allowed to wear. Therefore scouts will be almost exclusively purple whilst Terminators will be almost exclusively black. White/Bone colouring will be used as a contrast and will be used very sparingly.

These colours were actually inspired by several sources but primarily the Flesh Tearers scheme. Other influences are my original DT scheme which was in turn inspired by the original Salamanders green/black. I wanted something akin to the Eldar Dark Reapers scheme that just signified death and foreboding, without looking like Slaanesh (well maybe a hint but definitely not pink!). 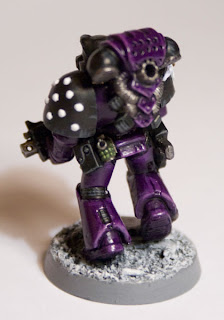 THE ARMY...
I'll go into the background in a future post, but the idea is that the Dark Templar have had an internal civil war – some turned to chaos, some stayed loyal – so faith is a big issue. The Chapter Master is such a solitary and intense individual, nobody's quite sure which side he is on. I have something big planned for his conversion model – keep watching!

WHAT'S NEXT...
I have a couple more test models on the board right now. I need to sculpt a master shoulder pad too so that can be duplicated. I also have a handful of models purchased a few years ago, intended to be part of this new DT army, that I would like to finish building and paint. This will involve no cash outlays for a few months, hopefully well past Christmas, which will keep my wife happy too!

See you next time...
Posted by The Dark Templar 4 comments: