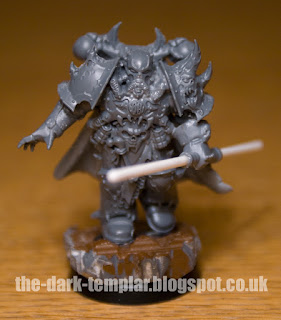 After the previous post introducing the latest character in my Chaos army I thought I should demonstrate how he came to be.

I've always wanted to somehow combine my two favourite sci-fi franchises into something that would let me re-live childhood days of playing with action figures, acting out my own, far superior storylines than anything George Lucas produced in recent times.

The one good thing to come (and go) with the Star Wars prequels was Darth Maul and he was the main inspiration for my new HQ choice. He will be my third attempt at having a Jedi amongst my 40k troops – the last one was a Blood Angels Librarian a couple of years ago who was built but never saw any paint. My hope is that with a deadline of Saturday we should see some swift progress, if not a totally finished model. 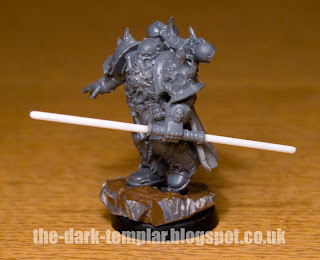 The current Dark Vengeance Chosen models have been something of a revelation and I had hacked the Lightning Claws of one particular model to use on my Terminator Champion. What remained was still a stunning model even without arms. I felt it needed to be used in a suitably fantastic way and so it became the perfect basis for my Sith Jedi. 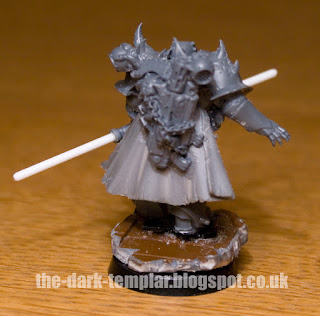 I ripped the Space Marine Commander's cloak off my old Blood Angel Librarian Jedi and stuck the backpack of the latest Chaos Champion plastic model that I've used as a Plague Marine Champ. I know there is a combi-melta on his back, and a Jedi would be unlikely to use a gun of any kind, but it demonstrates his status – plus I like the bounty hunter vibe it gives off, with various weapons strapped to his back. 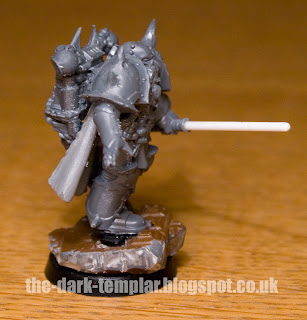 His right arm came, of course, from the Dark Vengeance Dark Angel Librarian. I was going to cut off the should pad and reposition it at 90 degrees so that the gesture could match the original Librarian pose. However, I felt a Sith Jedi would be more nonchalant in his force-manipulating gestures, so the shoulder stayed where it was. 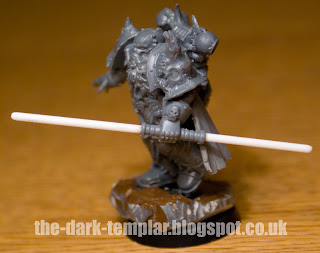 Of course he had to have a two-handed lightsabre like Maul had. I examined several different ways to achieve this, including a raid of my old Star Wars figures to find red plastic lightsabres. In the end I went for a Terminator Power Axe arm and some plastic rod. I like the idea that he would have a larger, more armoured gauntlet on his 'sword arm'.

I used the base that the doomed BA Librarian had been stood on, to give him extra height and gravitas. He just needs a little bit of greenstuff love to fill in gaps and add details, then we'll be onto the paint. I'd better make sure I have plenty of black!

I'll discuss his in-game attributes later in the week…