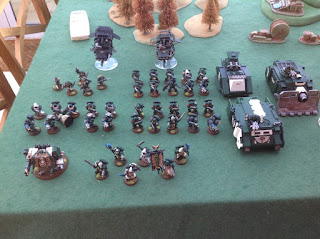 It's been a busy week thus far so the details of Saturday's battle are a little hazy now, but I'll do my best to come to some solid conclusions.

The game was another slug-fest – the kind of game that drains you completely. Very topsy-turvy, neither general knowing which way things were going to go. I think we both had doubts about our chances from the start, which is very strange.

Bull's list was largely what I expected. He went with the Chaplain/Command Squad instead the beloved Belial but, aside from that, there were no real surprises. The one thing he didn't do was split up his 10-man units into multiple 5-man squads, which would've allowed him greater flexibility. He also held the HQ back, hiding in the Razorback, no doubt awaiting a counter-strike opportunity. Unfortunately, when that opportunity arose I don't think Bull was feeling too confident about the outcome of the game and so they stayed put and the battle went on without them. I think Bull really learned a lot from this game, perhaps more than the previous one as there were more 'bread and butter' units in this list which should form the backbone to lists in the future.

I purposefully didn't take my flyer, denying Bull the opportunity to shoot it down. Yet, in my quest to constantly field the unexpected, I took some Daemons as allies which had mixed results, as well as my Sorcerer Jedi.

The biggest challenge however was the battlefield itself. With little cover apart from the large wood to my left, it was relatively easy to predict the progression of the game. However, despite this, neither of us took advantage of this information and did the obvious, not really challenging the opponent.


Would I change my list?
Too early to say if I'm honest. Things didn't go to plan but I don't feel I've seen this particular lineup enough to judge fairly. The Sorcerer is definitely not heavyweight enough to carry a combat – too few wounds and attacks and the positioning of the Obliterators can make or break their contribution. 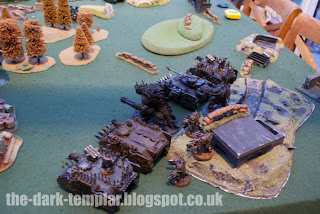 Would I change my deployment?
I would have kept a troop choice held back to control my own Objective and maybe kept the Obliterators in reserve so that they could deep strike in closer to the enemy. Everything else was solid I think, just the application of my plan fell apart.


Man/Unit of the Match?
Difficult one to decide as nobody really stood out this time. I'm thinking the Predator as, combined with the Forgefiend, it controlled the 'outfield', pouring fire into any enemy vehicles that came into line of sight. If they weren't destroyed they were forced to keep their heads down. The Hellbrute comes a close second. 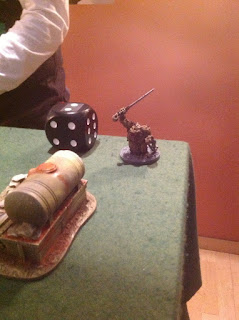 Wooden Spoon?
Without doubt the Great Unclean One. 160 points of close combat death that didn't participate in the game at all, he was my main assault unit and he went AWOL. Not entirely his fault – I decided to deep strike so close to the enemy, then rolled badly on the mishap table.


What about the (other) Big Fella?
The Sorcerer got a little short-changed in this game. His role was meant to be a supporting one, to enhance the Plague Marines as they charged into the enemy lines. Alas, I felt compelled to throw their Rhino into the enemy to distract the guns, right next to a Dreadnought, and neither HQ nor unit stood much chance after that. He did manage to cast quite a few spells though, which were excellent. He gave "Gets Hot" to all the guns in the enemy units around him, resulting in at least one or two dead marines. His enhancement spells meant that he took a couple of Hull Points off the Dreadnought, softening him up for the Hellbrute's finish. Being Initiative 4 and only having 2 wounds and attacks is not enough to make a significant impact in assault – even with enhancements. I need to see more. 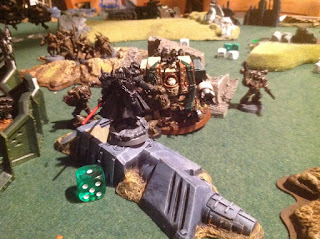 Other Stats…
The rest of the army looked like this:


What's next?
The trilogy of games concludes with a 2000 point battle some time over the Christmas holidays. I think Bull feels he has something to prove now, so expect the return of Belial, lots of Terminators, and lots of 5-man marine squads with plasma.

Once we get into January there could be a new Dark Angel codex so no doubt the gaming will continue for the Plague marines but against a much better equipped enemy.