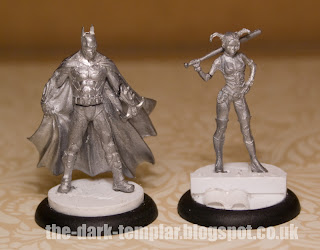 I've had a day or so free since Christmas to get some hobby stuff done. I managed to get my two favourite Batman models put together on custom bases as planned. The models themselves were in as few pieces as you could hope, but weren't without their issues. 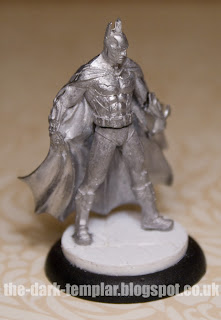 Batman is quite a heavy model and had almost no mold lines. There was significant flash around his bat ears and there was very little definition around the joint between his arm and batarang hand – quite bad miscast. I managed to pin body to legs easily before pinning hand to arm (this will need filling as you can see in the photos.

For his base I did simple flagstones that can be painted as if he is in the street. I stuck them on a wedge of plasticard to raise him up a little, but the idea here was simplicity. 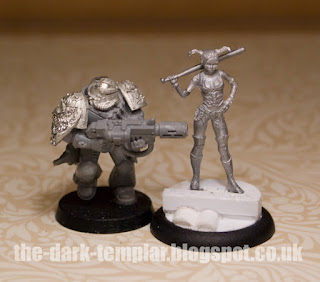 Dr. Harleen Frances Quinzel (Harley Quin) was a different matter. She has to be one of the skinniest models I have ever worked with – a size 0 for sure. The photo shows a space marine for size comparison.

My pin was too thick to attach her lower and upper arm parts together so I had to clean up what was there and stick the bat to the back of her head to strengthen the whole thing. There was a lot of flash on her arm piece which, given how thin it is,  was rather disappointing. I have probably lost some detail trying to correct this.

I wanted a little more detail on her base than B-man's so went with a variation on one of my original sewer bases. As part of Joker's crew she will probably spend more time in the depths than the caped crusader.

So there we go, a new project begins. I need to clean and fill these two a little more and then go out a get some new spray undercoat – then it's on to some paint!
Posted by The Dark Templar