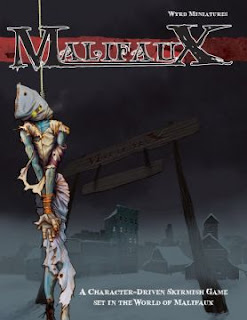 I appreciate that not all the visitors to this blog play Malifaux. This post is aimed at those visitors who are intrigued by Malifaux but haven't taken that final step or don't know where to start – hence I'm keeping it purposefully simplistic. The Malifaux regulars can have a read too and see if you agree or not with my appraisal and jump in with the comments.

Maybe you've heard the name or seen some of the models. Maybe you've read a blog or two, maybe even seen a demo game. Bottom line is that your interest was peaked and you want to know more. What's all the fuss about? Let's start with the very basics.

Malifaux is a 32mm tabletop miniature skirmish game from Wyrd Miniatures. It's described as a Steamvictoriohorrorwestpunk genre, so make of that what you will. 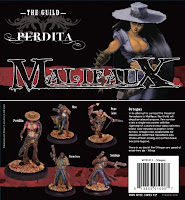 The Background Story…
Not wanting to rob you of any reading pleasure I will keep this as brief as possible. Think alternate earth late 19th century; a group of power hungry magic practitioners manage to rip a hole in reality, creating a breach to another world. This reality is deserted, no signs of life but plenty of signs of former human inhabitants, not least in and around the city of Malifaux. Long story short, the influx into this new world begins as people go in search of their fortune. The natural, demonic, inhabitants of Malifaux are not happy at this increase in the living and the fighting begins. However, thanks to the increased natural magic in the air and naturally occurring 'soulstones', mere mortals can become powerful sorcerers once through the breach. This thirst for power, magic, soulstones and wealth is what underpins society in Malifaux as well as being the catalyst for all the conflict. The Players…
The game comprises of five different factions to represent the various interested parties.


The Guild
They are the law, preferring quality to quantity in their crews and (for the most part) direct damage over spellcasting.


The Ressurectionists
The Ressers are all about the undead, summoning additional models to bolster their crew numbers.


The Arcanists
A faction full of fragile spellcasters, backed up by constructs and beasts.


The Neverborn
The monsters of Malifaux, they focus on speed, deception and willpower-based abilities.


The Outcasts
Mercenaries, groups and individuals who don't fit in with another faction. 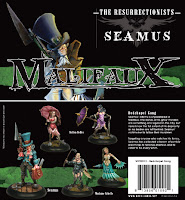 The Models…
The miniatures are the thing that drew me into the game – Perdita Ortega and Lady Justice if I recall correctly. They are pretty unique and let me tell you, after years of churning out space marines, they are an absolute joy to paint. You will only need around 5 or 6 models to start a crew so you can spend the time and attention that their beauty demands.

Most of the crews within a given faction cross over well, so it won't be long before you expand. One attraction of this game is that a crew box set costs around £20-£25 so it's not a massive investment to expand your gaming experience. It is possible to collect an entire faction for as little as £250, which is amazing compared to other game systems, and will give you great flexibility and a massive pool of models to choose your crew from. 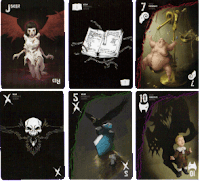 The Card Mechanic…
The Fate Deck. This is one aspect that makes Malifaux almost unique. After years of rolling handfuls of dice and cursing the gods of chance it was strange to be flipping a deck of cards to determine shooting and combat results.

The other unique aspect is the Control Hand which you deal yourself at the beginning of each turn. You can use these cards to alter the results of a flip from the fate deck that you don't like, be it combat, spells or willpower tests. This allows you the opportunity to, in effect, cheat and stack the result of a given situation. Then add to the mix the Red and Black Jokers – Red is very good, Black is very bad – so even the most carefully laid plans can go awry or knockout blows delivered from the most unexpected source. Be under no illusion, even with the ability to cheat fate, the gods of chance are equally fickle with cards! 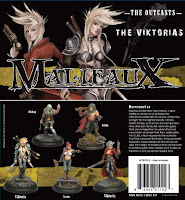 How Does It Play?…
I'm sure there are more experienced and literate individuals who could explain it better than I can and coming from a GW-centric gaming background I have a limited pool of games to compare. This is the best way I can describe it.

Imagine playing a cross between Necromunda and Mordheim, with crews comprising of only special characters – some very powerful. You're playing on a 3x3ft table, using cards instead of dice and gems or counters to represent your soulstone pool. That doesn't come close to describing Malifaux in full but it puts you in the right ballpark. The big difference is it's not about killing your opponent's crew, it's about achieving Strategies and Schemes – nothing else matters. You can finish the game with no models left on the table and still win big. As a former GW (and occasional Warmachine) gamer this seemed a very alien concept to me, and the most difficult lesson to learn. 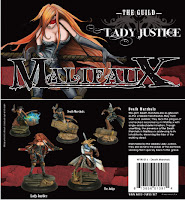 Learning the basics (the card mechanic, movement, combat, etc.) is quite easy and you can quickly play the game at a superficial level. However, more so than any other game I've experienced, Malifaux has a great depth that will take years to discover fully and master. The character and/or spell combinations alone open this game up to many levels of play. You only (usually) activate one model at a time before your opponent gets to go, so you have to carefully consider activation priority and your opponent's likely counter.

Another plus point is if you play 28-32mm wargames already you won't need to buy any specific terrain, the bits you already own will work a treat. Yes, you may want to build a unique wild west or swamp board at some point, but to get started you already have the bits needed – terrain, tape measure and counters (we even use dice for wound counters). 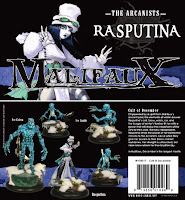 Who Plays This Game?…
I've noticed three distinct type of gamer drawn into the world of Malifaux.

First of all you have the general gamer who will have a go at pretty much everything and anything; the type of person who has an army/crew for all the games out there and is not hung up with any particular system, genre or company. They like variety and to try new things and the Malifaux system is pretty fresh thinking.

Then you have the gamers who have their main game, be it 40k, Fantasy or WarmaHordes. They play Malifaux as a secondary, as a way of taking a break from the big battles. They may get quite into the fluff and the nasty combos but nothing will pull them completely away from their first love. The complete change of scene and cheap entry cost seem to be the big draw here. 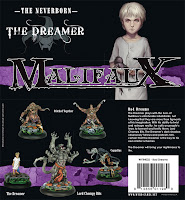 I've noticed a lot of gamers – myself included – who have discovered Malifaux at a crucial time in their gaming life, when they have become disillusioned by the rules/cost/development of the big, popular games and games companies. Malifaux takes them back to a place where the game and the gamers were important – the game itself is still in its infancy, relatively speaking, and has not been tarnished by the demands of big business. The community surrounding Malifaux is a big draw too and these individuals will often end up becoming champions for the cause, promoting Malifaux at every opportunity.

There is also a fourth group of individuals who have been attracted by Wyrd's flagship game and that is gamers' wives and girlfriends. Alas, my own wife balks at such thoughts, but stranger things have happened!

Generally speaking it appears to be the cheap entry level and beautiful miniatures that will initially appeal. The easy to learn rules system combined with the depth of play takes over once you start gaming. It won't be long before you want to buy another crew, then another. The relatively cheap cost of the crews means that you can do this, even alongside a massive 40k or Warmachine army.

The only negative that I've seen people mention, though it's not an issue to me, is the fact that you can't develop your own characters (yet) as they're all pre-defined. 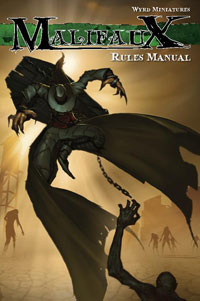 Where To Start?…
I think it depends on what drew you in. I bought some models as that is what attracted me first. I also bought the original Malifaux Book 1 (pictured at the top of the blog) which was fantastic for background information and stats of all the initial characters. Alas, the rules section of this book has been superseded by The Rules Manual so if you're not into the fluff go straight for that instead.

If you're not ready to spend any cash just yet you can still glean information and background from the internet.

Your first stop should be the new Malifaux website.On there you will be able to see photos of all the models currently available – and order some if the fancy takes you. The community area – Wyrd Forums – is a fantastic resource, especially for newbie gamers, where you will find the answer to almost all your rules queries. I cannot praise Wyrd (and the gaming community) enough for this; people are friendly, helpful and supportive no matter what your playing/painting level.

Within the resources section of the Malifaux website you will find lots of interesting stuff, not least a cut-down PDF version of the Rules Manual and up to date versions of the Book 1 character cards. There is also a crew creator application on there to help you build your crews.

In addition to this fantastic resource you have the fan-made Malifaux Wiki – PullMyFinger – which has been an essential resources for playing (and writing this article!). You will find a lot of background and gaming information and advice there.


I'm going to leave it there for this entry. Please feel free to comment if you have any questions or indeed disagree with my thoughts, or have betters ways of describing the game.
Posted by The Dark Templar