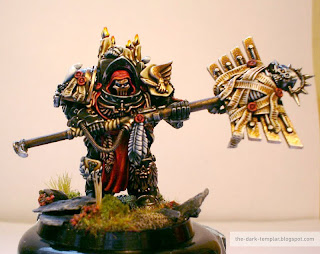 Before I go any further – THIS IS NOT MY WORK!

That's right, I didn't build or paint any of the models in today's post. They belong to a very talented guy called George Dellapina – former tournament team mate of mine and, up until recently, one of my closest mates. He used to work for GW at Warhammer World in Nottingham – he's been in a battle report in WD and his Space Wolves were in the back of the 4th Ed main rule book (can you imagine what that's like?!). George was painting for Forgeworld for a number of years – a lot of the large scale Eldar stuff, the Bloodthirster, and the Imperial Fortress. I have been lucky enough to play games amongst his Ork Titan Factory terrain that he built purely for himself.

The Terminator Chaplain above and Chaplain Dred below are part of his Deathwing army that he built some 5 years ago – every model heavily converted with lots of extras sculpted on. Alas these are the only pics I have of that army, but I re-discovered them at the weekend whilst sorting out my backup disc so thought I'd share them for the inspiration value. 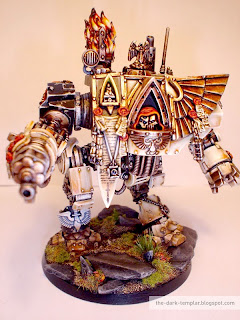 The Dred was part of his Deathwing army, and I saw it being built through many stages. It was sent away to GW US when he applied for a job there...and never came back...so keep your eye out on Ebay or your local GW store in the States!! Forgeworld brought out their Chaplain Dred not long after this was shown to the public...hmmmm.

I found the following link to more of his stuff (My Iron Warriors have fought and beaten his Orks and his Space Wolves...on the odd occasion!) and I may add some photos of his Ravenwing and Imperial Guard tomorrow:
http://www.ifelix.net/gamingblog/?tag=george-dellapina
Posted by The Dark Templar