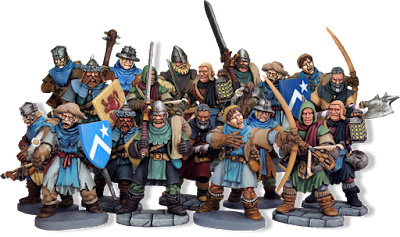 The composition of my starting warband is no less tricky than picking out spells for my Wizard. Of course it makes some kind of sense to leave the expensive boys behind – something to aspire to as the campaign cash comes rolling in (thanks for the tip Clint).

Looking at the bargain end of the list we have a War Hound, a Thug and a Thief (sounds like the start of a joke to me!). Hounds can't carry treasure which means they're going to have to earn their pay some other way. They're low on health and armour – and they're animals so could be controlled if your opponent has the right spell – but appear to be ok fighters, and they can move quickly. Thugs are not dissimilar, but slower with a bit more health and a bit more fight. The Thief falls somewhere in between.

Next on the list we have Archers and Crossbowmen. Decent fighters, decent shooters, with a bit of armour. Their stats and gear are identical except for…you can guess. The Infantryman, who costs the same as our shooty friends appears to be a poor man's version of a Templar in the list, a decent fighter with a 2-handed weapon. 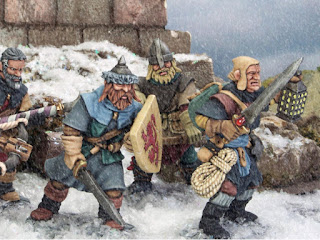 In the next price bracket things start to get a bit more funky. We have a Man-at-Arms which, again, appears to be the poor man's version of the more expensive Knight. Better armour than the Infantryman thanks to a shield but similar in most other respects. Then we have a Tracker, a rather speedy all-rounder and a Treasure Hunter, a good fighter.

I'm not going to look any further on the list. The expensive end of things looks very cool but would mean I won't have many men in my list. As things stand I could possibly take all Thugs and Thieves (to go alongside my Wizard and obligatory Apprentice) giving me a head count of 17!!

Of course this would give me no ranged attacks, which is rather silly, but a lot of bodies could do the business – too many targets for the enemy to deal with perhaps? 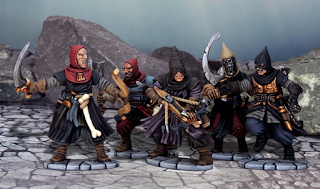 Alternatively I could take a mix of Archers/Crossbowmen and Infantrymen, giving me a head count of 8. However, if there is a lot of terrain all that firepower could be wasted (especially if my opponent has the Wall or Fog spells).

This leaves us with a mix of characters from all three price bands which, as Bull has noted, gives a few less bodies for a bit more punch.

More things to consider before I make my final list and play my first game of Frostgrave!