We've had a bit of time to think about our intro games of Guild Ball last Thursday. Despite the Butchers running out 6-0 winners on all three occasions, there's still a lot to consider and analyse. I always found in 40k that you learned more from your losses than your victories and that will mean that Bull will come back very strong next time, so I need to take in as much as I can about my own team. 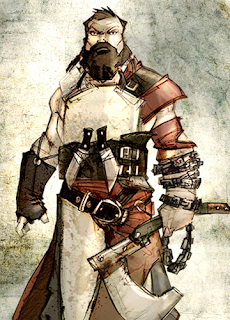 OX
The Captain performed as I expected him to. He was brutal on the attack and had enough hit points to make it very difficult for the Masons to take him out without committing everyone on their team to the task.

The extra damage that team mates gain from his 4" aura was very telling when the action was concentrated to one part of the pitch. In game 3 when the team was spread out more and I was unable to use the aura, I really felt the difference in damage output. His Legendary play needs to be used wisely and early on in a turn. The one time I did use it I didn't really get full benefit, but it would seem to be quite devastating if used correctly.

I'll be honest, I didn't use his plays much as I didn't feel the need. I think these will become more important as we move up to bigger teams. He also scored a goal which showed he is quite versatile when required, although his playbook only has pushes not dodges so he is relatively slow. 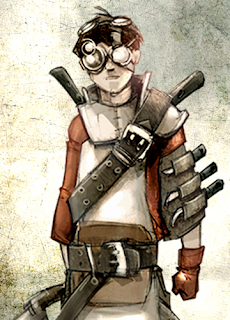 BOILER
This guy was something of a surprise package on the day. I had expected him to be quite fragile, but when he got into melee he was devastating. His -1 ARM and Bleed additions to any damage caused had quite an impact, and a couple of the Masons were taken out thanks to bleed damage. His TAC 5 is decent and his 4+ DEF proved to be quite good too.

I didn't use his playbook much – too interested in hitting things – but again, this could prove more useful when there are more players on the pitch. He did miss out a little not having the mascot, Princess, on the table, but still proved to be a rather important member of the team. 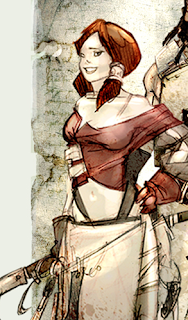 BRISKET
As my striker there was a bit of pressure on Brisket. Alas she was the one model I didn't get painted properly, sporting a basic coat only colour scheme on the day. Maybe it affected the way I looked at the model but she was the weak link (if there was one). She seems a little at odds with the Butcher remit of getting Momentum via damage. She is only 4 TAC and can't inflict much damage, the idea being that she makes use of the dodges instead. This would have improved if Princess had been around, so she missed out a little there. The lack of punch didn't really match what the rest of the team was doing though.

She proved her ability with a goal in Game 1 and was handy with a pass or two. Brisket also made extensive use of Unpredictable Movement, which frustrated Bull on several occasions. Facing a Masons team with only one guy in it I didn't get to use Charmed as much as I would have liked, but she did become the one to face Mallet as he struggled to do much damage against her. She managed to support the other two bruisers in the team in melee and as such took on more of a supporting role.

Her main contribution however was the dishing out of Dirty Knives. This proved quite devastating on a number of occasions for Honour, who was losing wounds in most Maintenance Phases. Poison really is a nasty condition and the -1 DEF aids the rest of the team with the damage dealing. 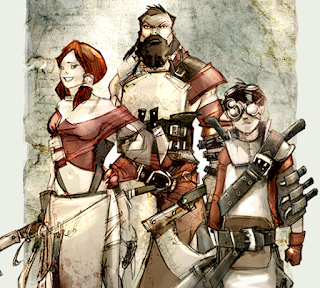 TEAM PERFORMANCE
I understand now why the Butchers are considered one of the starter teams. There was no real learning curve – you just charge in and wail on the opponent. I had Momentum Points coming out of my ears, and even forgot to award myself some at times such was the volume of damage being done and frequency.

Whilst not as effective working as individuals, it was very forgiving and I rarely felt truly threatened in any of the three games. This team is brutal and the opposition needs to stay out of melee as much as they can. I did manage to play some ball-related tactics but that's not what the Butchers are about. I can see this becoming a little one-dimensional in the future, whereas Bull will no doubt evolve his tactics as time goes on.

I'm looking forward to seeing the other members of the Butchers team in action and seeing how the players interact and cope with more opposition players. I expect Bull to have much more success with bigger games as he will have more options to move the ball about and tie up key members of my team.