Just before Christmas I was contemplating the options for building a Frostgrave warband. Scale can be a bit of a minefield so I thought it was time to do a bit of a lineup to see how my various options fared against each other. The photomontage above (they wouldn't fit nicely in a single shot) is the result – the image is pretty big so give it a click for a closer view.

From left to right:

You may have noticed an official Frostgrave model in there, so I'm comparing everything to the guy on the far right.

As you can see, the majority of the models would happily sit together on the tabletop from a scale perspective, but would I be happy with them?

The Dark Emissary is distinctly bigger in scale than the majority of models around him. This could come as a bit of a blow as I was intending to use him as my wizard. However, given his hunched posture we could actually get away with it. I think this could be a winner.

Sin Assyris is very tall, even taking into account the slightly taller base. Proportion-wise the model looks ok – hands, head, etc seem on par with some of the others. Maybe it's just this model in particular, so I may have to try a different Rackham miniature to be sure.

The LoTR Ranger looks ok, if a little on the small side. He would easily pass as a youthful addition to a warband and is a pretty suitable model all round.

The Crusader is awesome and a perfect fit for a role in Frostgrave.

Lenore was my Maid Marian stand-in and is a great model. Whilst being very slight compared to the Frostgrave Barbarian she would fit into a warband nicely without looking out of place.

Similar to the Ranger, the Foundry Crossbowman is a little on the small side, but there's not much in it. I think he would be a great addition and I have so many poses to choose from.

The Black Plague Clovis model is lovely, as are all the new Zombicide:BP miniatures. Alas he's just a bit too big. If I had a single model from this range included I could get away with them being a giant of sorts. Unless I was going to have an entire band made up of these models I think I'm going to have to pass – real shame. 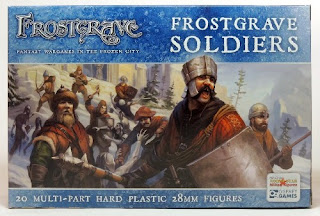 This has been a very worthwhile exercise indeed. However, I was very lucky this Christmas and received not only a fistful of metal Frostgrave models but also a box of the plastic Frostgrave Soldiers. Now I'm really spoilt for choice!