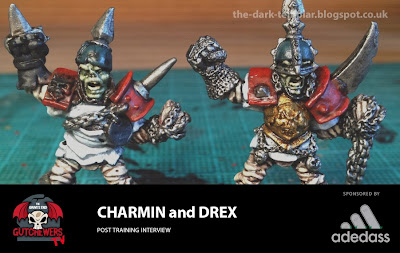 Today we have the heavy hitters in the Grave's End Gutchewers' front line, mummies Charmin and Drex. Like their Wight teammates, conversation was minimal.

As you'd expect, these guys are slow on the pitch… I mean really slow. However, as one of the hardest hitting non-Big Guy/non-Star Player options in the game, they're a key part of the Undead team. Positioning them will be key as they can't jog over to a new position. Think of them as columns holding up a Roman temple – they're not moving!… either under their own steam or someone else's.

The painting is coming along well.

With three days to go until game day, none of my 11 models are complete, but only 3 are looking sparse. It has been a welcome distraction getting out the paints again. I wouldn't say I've enjoyed every minute (a lot of repetition) but it's been fun.

Given the tight deadline, I've taken a Bullcher approach of simply getting paint on the models and not spending much time with details. After the games we play, any MVPs or acts of heroism will warrant a bit more paint attention, so the stars will begin to look fantastic and those that don't perform (or die) with stay the same.

Hope to have another post for you on Friday, then post-match details over the weekend!