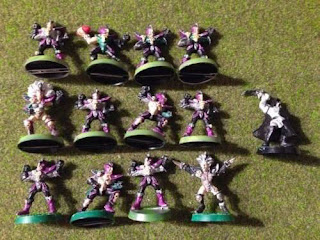 With the house move delayed until the new year I thought I should dig out some model bits from the attic and get something done, before my hobby mojo dies completely along with the blog.

As I mentioned previously, I purchased a couple of Blood Bowl teams from ebay last month, including the above Dark Elves. As you can (kind of) see, they're not very consistent with the paint job, rather basic and unfinished. You will also know that is not how I roll, so it was time for some surgery! 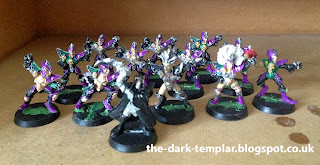 Once I'd taken the models off their old bases I gave them a quick scrub in warm soapy water. I could have stripped them properly, but I'm not looking for painting awards here and needed to get this little project rolling.

I spent some time finding replacement plastic bases in the attic and went about gluing the models in properly. We did have a casualty in the form of a Blitzer who lost the tab he was attached to, so had to be pinned. I did want to pin the lot so I could have pennies in the bases to weigh them down, but time is limited and I'm hoping to have a game against one of Bull's plethora of BB teams before Christmas. I had to crack on! 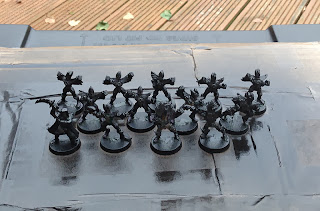 Half an hour later almost all remnants of the old colour scheme was gone.

The big question now is… what colour do I paint them?

Do I go with the traditional Purple/Black, do I go with a Red/Black or Dark Blue/Black instead, which are also popular colours for Dark Elves generally?

Once these guys are done I also have my Undead team, the only team I've played BB with, as well as a plastic Human team… for giggles.