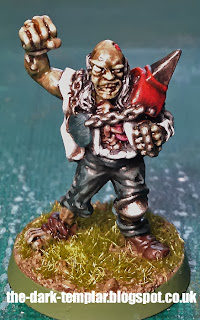 After the disappointment of an opening game loss I was keen to get back into it and dish out some payback to those Orks, and the Gobbo especially – he was going home in a bucket!!

There had been an Undead hero in the previous game and it was time to lavish some attention. Dedleg, my Zombie lineman (above) had knocked out a Black Ork in the previous game, drawing first blood and being awarded the Gutchewers' MVP as a consequence. As well as receiving a new skill "Block" for his achievement he also had some alone time on the painting table. He was looking a lot more like a star player now! 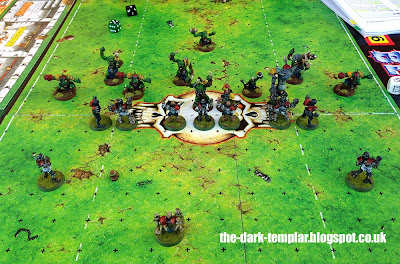 So I arrived at the Orkland Raiders' stadium yesterday with a week of research and an action plan. However, the one thing I hadn't banked on was the wrath of the dice gods. It seems that I have insulted them in a previous life to such an extent that my dice rolling is beginning to defy the laws of probability and averages. 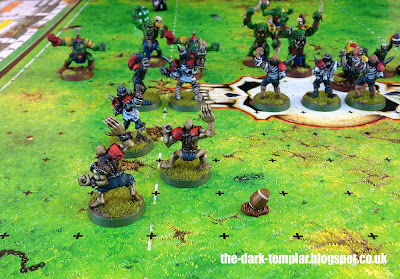 The game started well – I chose to receive and the ball landed kindly. The first few actions were spent positioning my team so that we could make our move in the following turn. Gone were the reckless blocks in favour of something entirely more strategic. 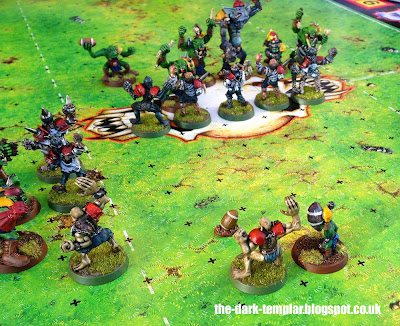 As expected the Orks came at us… and the Gobbo came flying over the heads of the players to land almost on top of the ball. 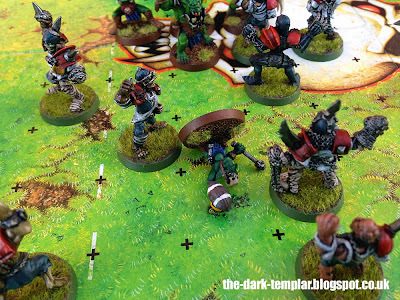 With the previous game still fresh in the mind, it was decided that I should follow through on my promise. The gobbo got hit… and then we stamped on his head, sending him to the 'dead' box, no longer to play a part in the game. He would indeed be going home in a bucket!

It was at this point that my problems began. I just couldn't pick up the ball.

I sent a Ghoul towards the left flank and a Wight down the right so that I could throw a pass of some description and get the ball out of my own half and away from the rush of the Orks. Alas my ball carrier didn't survive the turn to attempt a pass and the ball bounced out of his unconscious hands. 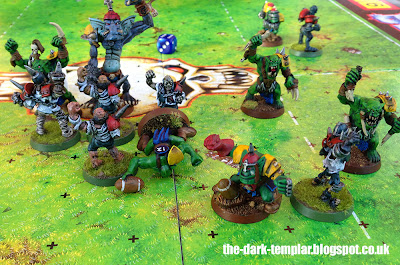 As had happened all game, the ball was magnetically attracted to the Ork players, randomly bouncing balls always ending up at Ork feet. Even when I mashed the Ork thrower (above) the ball bounced into the arms of the nearby Blitzer, despite being surrounded by undead players.

In addition, most of my hits were resulting in ineffective pushes or backfiring and my own players going down. The dice gods were not on my side. 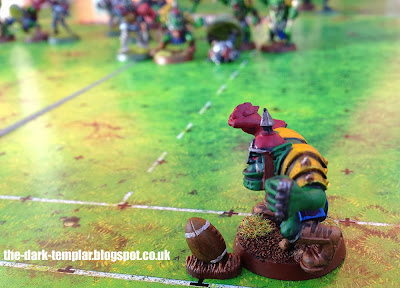 It wasn't long before the Orks strolled in for their first touchdown. With one turn left and me receiving, I decided to try and inflict some damage on the opposition. 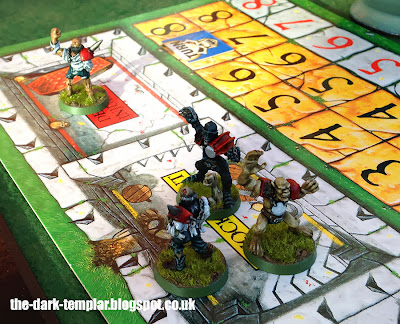 As the half came to a close things were looking bad for the Undead. Not only were we a score down, but we had some major players off the field, including Dedleg.

The hope was the second half would be kinder… not to be. In fact things got steadily worse. My dice rolling was now becoming ridiculously poor and the ball ever more attracted to the Orks. In the end, with my team unable to hold the ball for more than a turn and the game surely lost, I decided to switch tactics. I let the Orks have the run of the field and concentrated on killing a few more.

Even this proved to be a futile tactic. Even when outnumbering individual Orks 5-1 my team were unable to foul any more of the opposition, often unable to knock them down. This was epitomised when a mummy blitzed an Ork Blitzer only to fall over his own bandages (despite using a team re-roll) and injured himself, taking no further part in the game. That's the equivalent of rolling double-1 TWICE, followed by 11 or 12 on 2D6 TWICE. That was quite some feat!

The Orks strolled in for their second touchdown and the game came to an eventual conclusion.

Having felt somewhat robbed in last week's game I had steeled myself for this week, able to laugh off a lot of the bad luck. Yet even Bullcher commented how the bad dice weren't making for a great game.

Luckily, all my injured players returned unhurt, but with a measly 2 SPP for the entire team there was not much chance of new skills. The MVP eventually went to the Mummy, Charmin, who managed to stay on his feet for the entire second half and knocked down a couple of Orks in the process. Clutching at straws to be sure.

Throughout the whole game the Undead had managed less than 6 knockdowns, which is simply staggering.

Having saved money up to this point we can splash out on new players, however the Orks are starting to acquire new skills which is going to make things more difficult going forward. The Undead can do a good job of defending, we just can't do anything with the ball – even on a 3+ with re-rolls we drop it – and I'm running out of ideas.

Time to find a star player to join us!