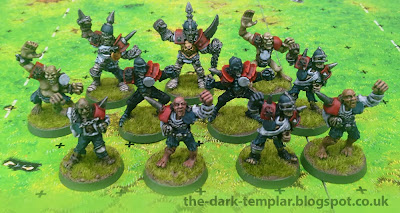 Game day arrived and the Grave's End Gutchewers travelled up the M20 to visit the Orcland Raiders – first Blood Bowl game of the season. The Undead were all painted, and I'd remembered to pack them – the signs were looking good (aside from the atrocious weather!). 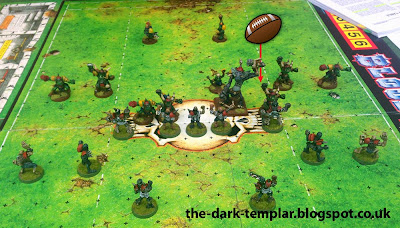 All the pre-game amble was done and we were ready to kick off – Orcs receiving in fine weather. As I am slowly learning, Blood Bowl is a game of no control and complete randomness – despite kicking the ball to land between the two Orcs at the back of the pitch, the ball bounced a staggering amount and finally landed behind the troll, almost on the half way line (see above). 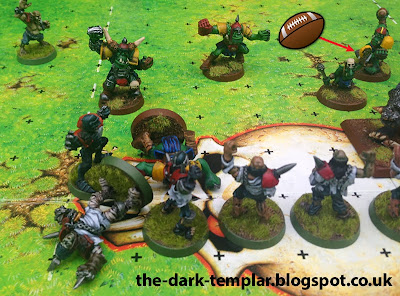 It was promptly scooped up by the Orc thrower as the Black Orcs and Blitzers started to form a cage. Models on both sides were getting knocked about but mostly getting back up. It was very balanced and the Orcs were being rather cautious on their opening drive as both teams jockeyed for position. 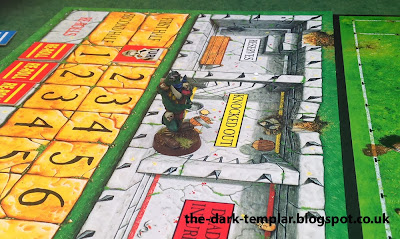 With all that violence it wasn't long before we had our first casualty. A Black Orc was taken down by the zombie Dedleg, and off the pitch he was dragged to be patched up. 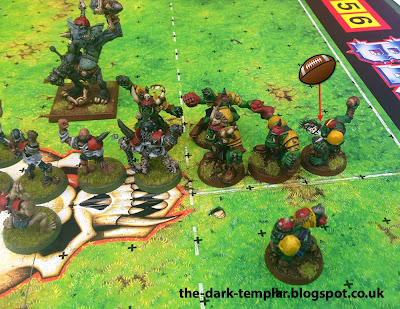 A gap opened up on the right side and before I knew it the Orc thrower darted down the touchline and was in danger of breaking away. The Gutchewers rallied pulling as many players across as could be spared. Lots of josling ensued as the Orcs edged their way down the pitch. 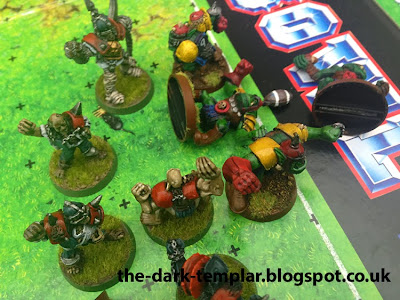 The pressure grew on the ball carrier and eventually he was knocked out of play and into the dead bucket by the skeleton Bones, ably supported by Dedleg, the ghoul Mantanner and Drex the mummy. The ball got spilled… where would it land?! 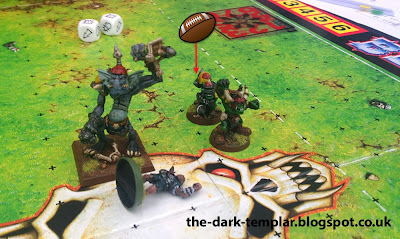 Well, the ball landed straight into the lap of the Orc Blitzer who had been stood next to the Thrower. He ran back towards his own half of the pitch and hid behind a Black Orc, running down the clock to half time. So the ball finished the half pretty much in the same place it started!

Finely poised then at the break as we moved into the other room for pizza. We had been joined mid-way through the first half by Michael from 28mm Victorian Warfare, who had been keenly taking in the action.


Second half began, Gutchewers receiving. Again the kicked ball bounced hideously back to the halfway line. It landed on one skeleton (Bones) who didn't know what was going on, then bounced to the skeleton, Creaky, next to him who also failed to pick it up. It then shot back into the Orc half resulting in a touchback – meaning I could give the ball to any player I liked.

The Orcs had left an inviting gap in the middle of the field, a trap no doubt but I had devised a way to get through and, with a bit of luck, catch them flat-footed. 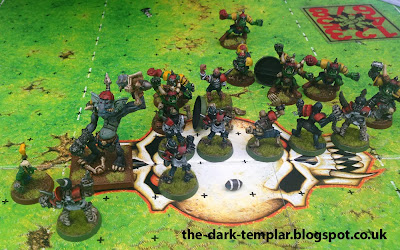 Alas it wasn't to be and the tiny gap I'd left exposed proved fatal as Bull managed to knock down the ghoul ball carrier Ateman and the pigskin flew up into the air again. It landed in Creaky's lap again but he couldn't hold onto it and dropped into the square next to him (above).

I concocted an alternative plan and wheels were put in motion and a gap created on the left flank for the other ghoul, Mantanner, to exploit. 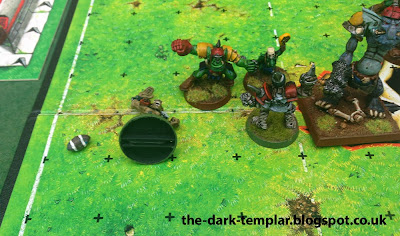 Again, luck was not on my side and Bull managed to somehow get a Blizter across to foil my plan. The ball spilled again. 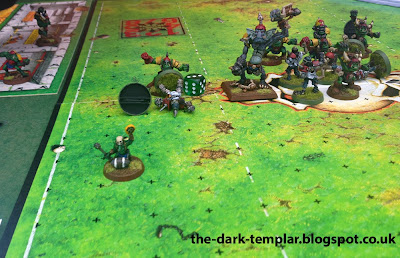 With some creative blocking the Goblin managed to squeeze through the gaps, pick up the ball and ran hell for leather towards the end zone. 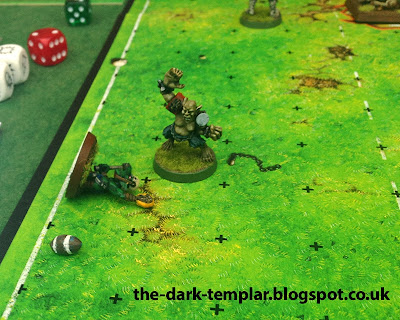 Retaliation was swift and Mantanner recovered to blitz the goblin spilling the ball into the air again. Bull sent a Blitzer charging after the ghoul but everything was set up beautifully for the Undead recovery.

The mummy Charmin blitzed the Orc Blitzer, to free up the ghoul to get the ball. It was a straightforward manoeurvre but I managed to roll double skull – the equivalent of a double 1 and meant I was face-down in the dirt and my turn ended. Not to worry, I used a team re-roll and tried again…

I couldn't believe what I was seeing – how can you roll the equivalent of a double 1 followed by a double 1…!?!

This handed the goblin a good shot at getting to the ball. He wriggled out of the ghoul's tackle zone but couldn't pick up the ball. Back to me.

With no team re-rolls left I decided to do a couple of easy hits first before the ghoul went for the ball. This time the other mummy, Drex, managed to roll very badly and fell on his face. ARGHH! 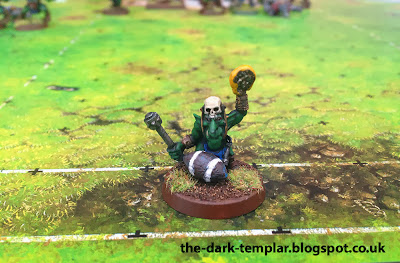 The goblin was not going to miss a second time, scooped up the ball and skipped into the end zone.

With only two turns of the game left there was not much that could be done and the game ended.


Wow.
Wasn't terribly happy during that second half, the dice gods were definitely not on my side one bit. This is what I have found frustrating about Blood Bowl – I like to have a certain level of control when gaming, but this game can be totally random and you need to be able to deal with that. Today I wasn't and so endured a hard time of things at the end.

We came away with a loss, but the MVP Dedleg got a new skill and the two casualties I had survived unscathed, just about.

My thanks to Bull for hosting a great day – let the banter begin – and thanks to Michael for making the journey up to see us. He managed to get a bit of a game in before home time which was excellent (aside from that bloody goblin scored again!).

Looking forward to a re-match sometime over the Christmas holidays.


We will return… and next time the goblin's going home in a bucket!