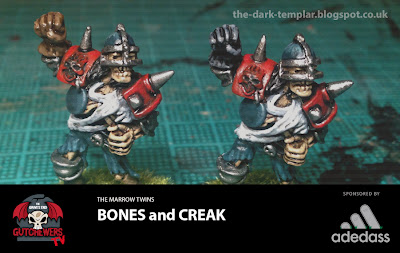 Two more members of the Grave's End Gutchewers team for you, this time we have the Marrow Twins – Bones and Creak.

Game time is fast approaching. The last of the paint is going on the team so we'll have a fully painted box of death rolling up the Raiders' front door… that's if I don't leave them behind!

The line up has been chosen (or rather, decided by the models I own) and vague investigations have been made into team tactics. The best thing I read was that Undead teams can't buy an Apothecary – instead they automatically get a Necromancer who will raise an opponent killed in the match to play for the Undead team next time out.

Will the Gutchewers get buried, or will they come home smelling of roses?!