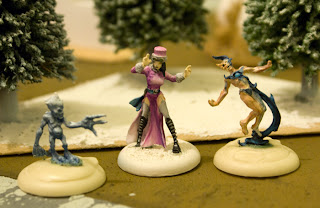 So after Rasputina took down Miss Ortega a peg or two last week, anticipation had been building for this week's 30 soulstone rematch. Fug has acquired some new models and splashed some paint on his icy master. In response I had finished painting Perdita and had added a couple of undercoated Witchling Stalkers to the mix.

For Strategies Fug flipped Distract and decided to take (and announce) Hold Out and Bodyguard for his Schemes. I flipped Slaughter and took Hold Out and Breakthrough, similarly announcing them thanks to some sound advice from Wrabbit37 after last week's game.

Deployment was standard set up, Raspy had her crew central again with Hans to my right, supporting the infiltrating December Acolyte. I divided my crew into two teams – Perdita, Nephilim and The Judge to my right and Santiago and two Witchlings to the left. 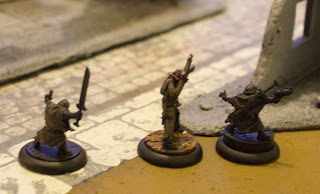 The game did not quite pan out as expected – I think both Fug and I were not totally on our game and the whole thing felt like a bit of a slog, so I'll keep it short.

I decided to go for it from the off as I had to get my crew into Fug's deployment zone to prevent one of his Schemes and complete one of mine. Perdita ran full sprint to the right behind some rocks, out of sight of Hans but in full view of the Acolyte. I had managed to get both Jokers in my Control Hand so felt I had some influence over the situation. As anticipated, he attempted to fire his harpoon at Perdita to pull her into view but I got off my Quick Draw response, cheating the Red Joker and taking him out of the game with a total of 9 wounds inflicted. It was a bit of a bloody nose for Fug so early on and he struggled to rally from then on as indecision and lack of direction took over – he was mostly reacting to my game. Elsewhere the rest of my crew moved up whilst Hans moved back to the centre of the board to support Raspy.

Following turn same thing, I moved up and Raspy consolidated, exchanging a few shots here and there to little effect, except the loss of a Witchling who had bared his backside to test out Reflect Magic only to not achieve the trigger. 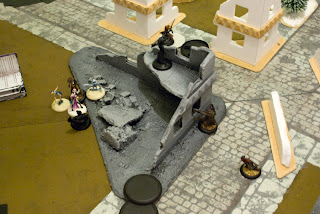 I then saw an opportunity to get Perdita into melee with Raspy, so I took it, charging in and slapping 4 wounds off her. The response was unsurprising but caught me off guard – having not thought through my actions completely – the Ice Gamin moved into melee and the Silent One move over to drop spells onto the growing crowd. I attempted to shoot Raspy in melee with Santiago but only managed to hit Perdita – TWICE! Luckily I managed to cheat the shots down but for two turns I was out of cards.

I had overstretched Perdita and the rest of the crew were struggling to get up in support. The game became all about Perdita surviving the incoming attacks and spells by any means possible. Healing flips only managed to negate a single wound and her damage see-sawed dangerously close to death. This would be an all or nothing game for both sides.

Eventually The Judge made it to melee in support, having avoided a Headshot from Hans, and Perdita took down Rasputina. The trick was now not to die to exploding Gamin/Silent Ones. She took the Gamin explosion on the chin – one wound left – and Obeyed the Silent One out of melee so that The Judge and Santiago could shoot it, cheating down the Disengaging Strike to make sure Perdita was well clear of any exploding corpses. With the Silent One having activated first she was no longer a threat should the shooting fail to kill her. It didn't and she exploded, missing Perdita's crew. 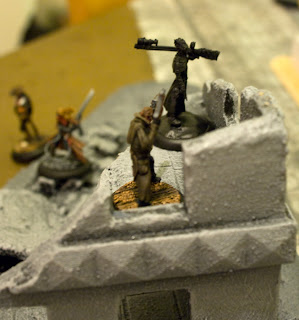 At the end of Turn 6 Fug only had Hans left, who had given a decent first performance in spite of awkward initial deployment. I had lost the two Witchlings but everyone else was pretty much in Fug's deployment zone. Rasputina hadn't really had the opportunity to get going. Aside from taking down a Witchling via Perfect Mirror and casting a set of Ice Pillars she had struggled.

A harsh result on paper given how close it came but a lot of lessons to be learned on both sides. Perdita had taken out Raspy, Acolyte and a Gamin but MVP for the Guild crew was actually the Enslaved Nephilim, who had accompanied Santiago across the centre of the board, achieving Obey several times to give the big man extra movement and shots – although he did resist on one occasion with a Red Joker flip. Idiot!


Next up… McMourning's debut this Saturday.