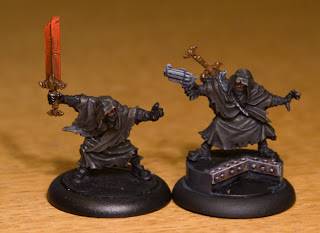 Today was the debut performance for Bull's Dr McMourning crew. This was very much a beginner's game as Bull hasn't played in a good six weeks and was fielding an unfamiliar crew to boot. Fair play he had done his research and had his opening sequence of hacking up dogs and slicing chihuahuas bullet-pointed on a piece of paper. 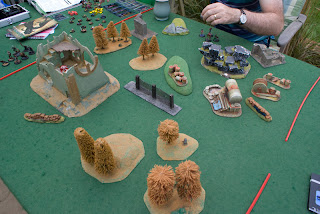 For whatever minor role they would play in this game we flipped for Strategies and chose Schemes. Perdita got Contain Power and so I chose Hold Out and Stake A Claim in support. Bull flipped Line in the Sand and chose Stake A Claim and a Ressers specific Scheme. For anyone interested the crew lineups were as follows: 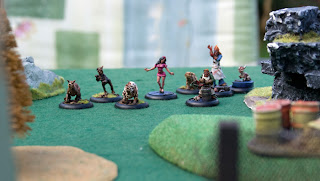 Not much point going into details about the game as it ended up being more of a practice – there were several incidents where we could have, and should have, done one thing but ended up doing something else to see how a new model worked or the impact it would have on a given situation. 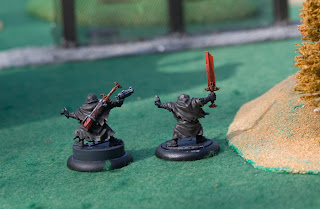 Some of the highlights included:

Perdita Obeying one of the Canines who turned on the Nurse and tore 5 wounds off her. To avoid any reprisals Perdita then shot the dog.

Mc Mourning finally managed to summon the Rogue Necromancy who was then shot to bits by Santiago. Hanging onto its last two wounds the Necro was jabbed by the Nurse with a Booster Shot so he would go nuts when attacking Perdita in melee – Perdita had the intention (and the cards) to Obey the boosted Necro to turn around charge McMourning or kill the Nurse. However, as mentioned, I decided not to do this so we could see how nasty the Necro was in combat. 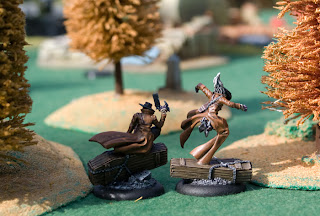 Later on in the game the Belles were Luring people left, right and centre and McM got an amazing turn moving across the board, Slinging his Scalpel at a Death Marshal then moving in for the kill. The second Death Marshal was Obeyed into melee with McM in order to Pine Box him next turn – the doc escaping via another Lure from his Belles before the trap could be sprung. 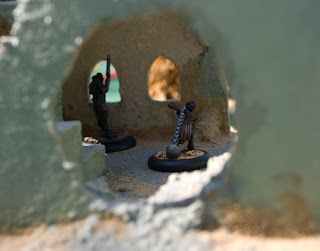 We called the game at Turn 5 after I had won initiative and activated Perdita, Santiago and the Nephilim. Perdita killed McMourning and Santiago was Obeyed into a position with full LoS to the wounded Belles and Gunslinger. The balance had tipped in favour of The Guild. At this point I had managed to achieve my Strategy and one of my Schemes quite by accident and Bull had a Scheme (and had ignored the Line in the Sand, haha!). However, today wasn't about final scores.

Good game, it has to be said – despite the 4 hour timespan. Bull has got a bit more of a handle on his new crew and I got a glimpse of what they can do. We went back and practiced his opening turn with the Chihuahua and Doc so he got that right and bagged his 8 Body Parts. He seemed a lot happier and very excited at the prospects of his Ressers. 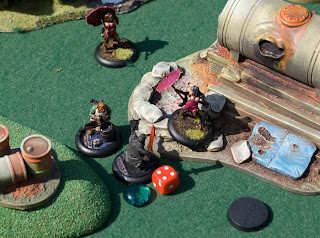 As for me, I got more practice in with my master-of-the-moment. Santiago didn't do much, though would have contributed more had the game continued. The Witchlings (my Sith Jedi) got into combat and managed to have a little more impact than Wednesday – though not much. I think it's because I haven't finished painting them yet.
Posted by The Dark Templar