Getting Started With Age Of Sigmar – Storm Strike 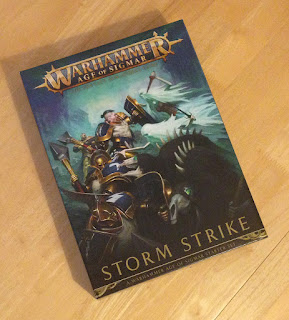 Age of Sigmar was something that never appealed to me. GW decided to defy every gamer's belief and bin Warhammer, and AoS was the replacement – a pseudo 40k set in a multi-realm universe where pseudo Space Marines (or rather their fantasy equivalent) once again took centre stage. I wasn't interested. I had a fleeting interest in Warhammer as a game, loved the world it was set in and really like the model range that was developing. That had all gone now and I was cross, so lord only knows how the avid Warhammer gamers felt!

However, time heals many things and, as I don't play much of anything now, I find myself taking a greater interest in many things I would never have considered before. I have a handful of the new AoS miniatures as part of my Shadespire collection and really liked those, so found myself browsing the AoS range. Long story short, I am now in possession of the £25 Storm Strike Starter Box and the £5 "Getting Started with AoS" book and model. 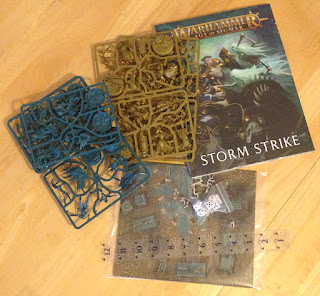 This box set have everything you need to get started at the most basic level. It comes with a handful of sprues that provide half a dozen or so models each for two players, as well as dice, rulers, a gaming 'mat' (poster!) plus basic rules and background fluff.

I have to say I'm mighty impressed.

First of all it was £25 (…actually I bought it from an online supplier and it only cost me £20)!! That's everything for the same price as a box of marines. The models are stunning – they may be 'easy-to-build' variants, but they're great and come with ridiculously lavish bases. 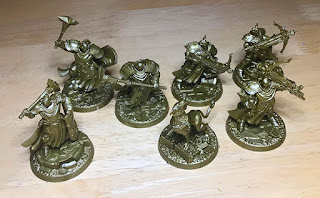 I have only built the Stormcast Eternals at the moment but it took less than 20 minutes to build the lot. The 'army' is the size of a Malifaux crew, which is my preferred model count, and they are chunky things – very solid. The gold coloured plastic is a little garish but that should only spur me on to paint them (or at least undercoat them!). 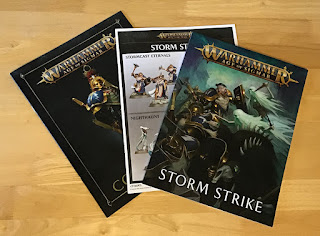 The rulebook is a printer version of the basic PDF that can be downloaded for free online – it's a light version of the rules so you will probably need to invest in the big book if you're sticking with it. There is also a build/paint guide and the main Storm Strike book. This main book is like an old-style 40k codex, so reasonably thick and well printed/finished. It contains lots of intro stuff, plus an extensive section on how to build, paint and game with your miniatures.

The thing that really impressed me with the main book though was how the scenarios (sorry, battleplans) are laid out and develop. It's basically a step by step intro to the game and in some instances may only have a single miniature on a side. Each battleplan focuses on or introduces you to a new rule and by mission 4 you're using everything in the box. The book rounds off with where to go next, as well as going into some depth about the background to all the units/factions involved in the box set and the universe they inhabit.

This is one of the best miniature wargame starter box sets I've seen. It was priced perfectly and had enough info and intrigue to provide great value for money as well as draw in a new player (even someone as cynical as me!). They do have two other starter sets that are closer to £50 and £100, which give you more models and even the full hardback rulebook, but this felt like a true starter set aimed at complete starters. It doesn't involve great investment and would make a superb Christmas or birthday present (shame my wife won't venture into a GW store!). 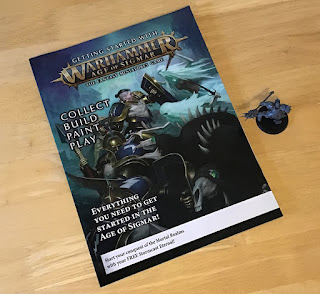 HOW TO GET STARTED

I'll be honest, the only reason I bought this was because there was a 'free' model included for the £5 pricetag. A stunning, single sprue Stormcast caster dude, the likes of which would normally retail for £15-£20. It was a no-brainer, even if you're not that interested – he'll be awesome to paint (£5!?!). 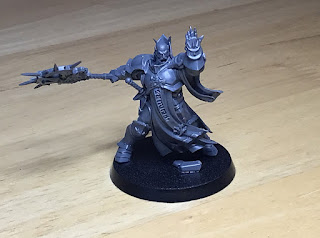 Immediately I jumped in and started to build him. Very straightforward to put together even though he's not an 'easy-to-build' model. He did come with a tiny pile of stones that were starting to float, to add to his base. I could see straight away that they would have snapped off very quickly, so clipped them and just stuck down the base stone to plug the gap in his base instead. His base is not nearly so elaborate as the models in the Storm Strike box set.

The Get Started book is very similar in size and finish to the Storm Strike book (even has the same image on the cover to confuse me even more) but has even more info packed into it. There are sample armies, a battle report, lots of background info as well as in depth explanation of the different painting techniques employed. It goes through the basic rules in principle, laying out the different phases without giving any actual rules away.

This was another win for me. It is the perfect precursor to the Storm Strike box set, and a great introduction to not only AoS but fantasy/skirmish miniature wargaming in general. It allows you to dip you toe in without spending more than your lunch money. I would have loved something like this way back in 1990, and I know it's the kind of thing my son will pour over for hours (when he's a little older).


Alas that's not the end to the GW fan-boy. Next time I'm going to go through the GW Battle of Pelennor Fields box set for the new Middle Earth Strategy Battle Game rules. Yes, I jumped in with both feet!!