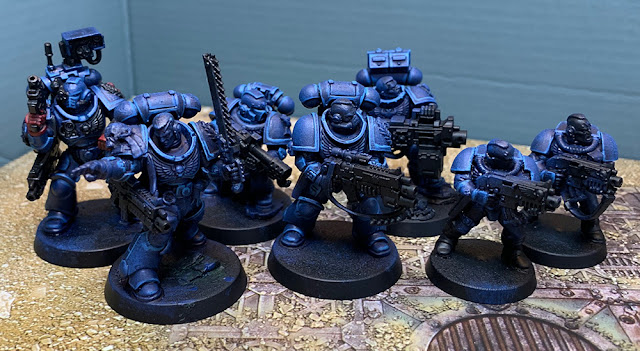 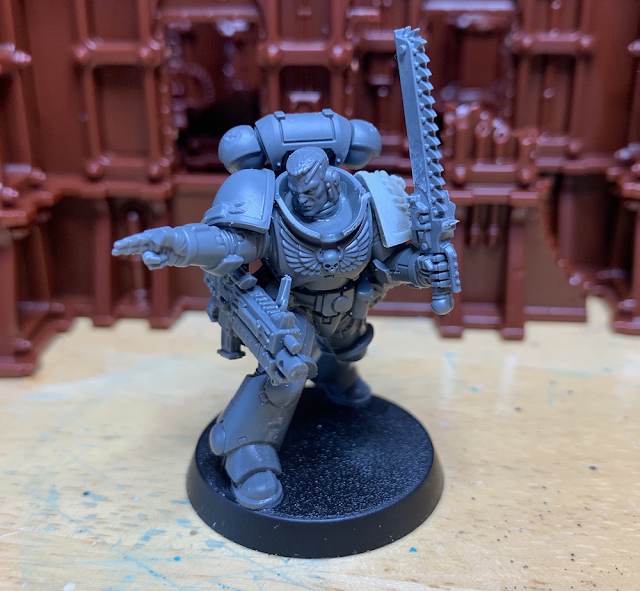 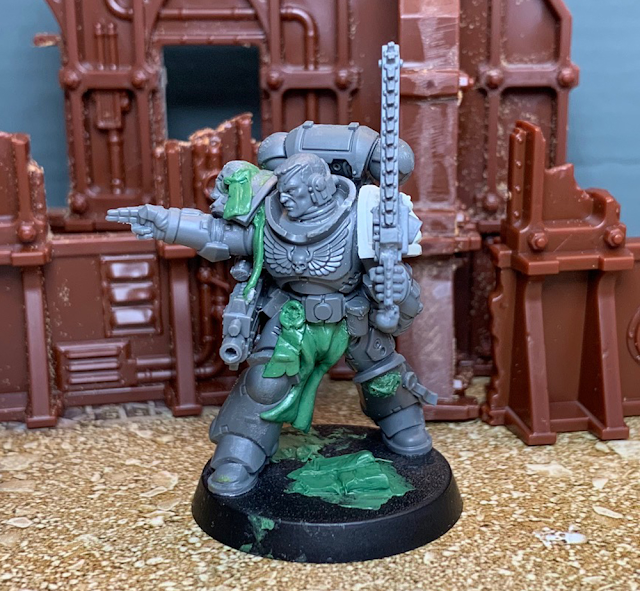 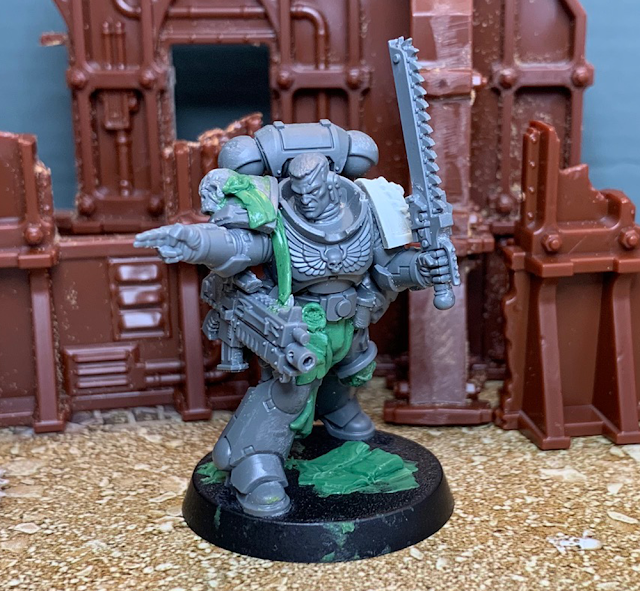 After the success of my terrain sponge painting, I pondered the prospect of using the same technique for painting space marine armour. The 7 members of my Crimson Fists Kill Team were the perfect opportunity to give it a try!

I picked out two extremes from my team – my Comms Intercessor and one of my Scouts. This should give me an idea of whether the sponge technique will work for models or not. 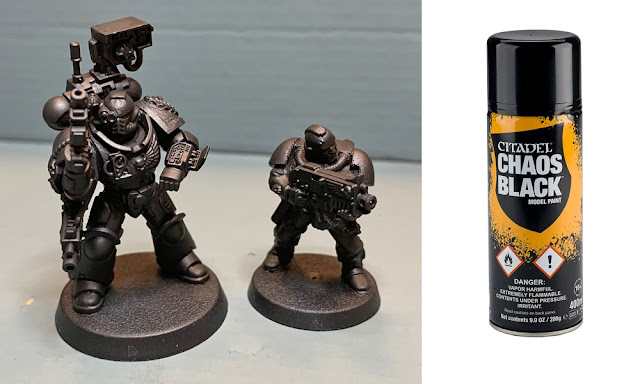 Step 1
As always, a spray undercoat was the first order of business. In this instance I chose Chaos Black as I wanted a dark feel to the armour. 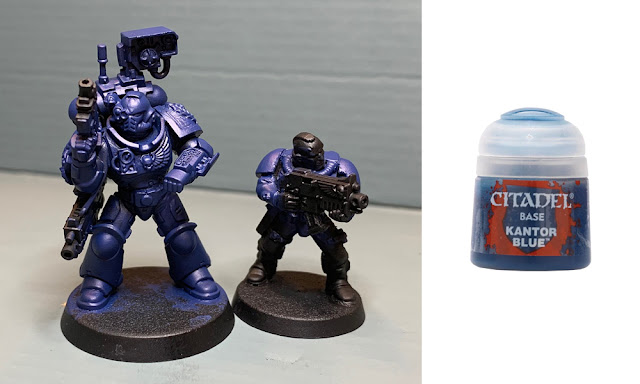 Step 2
A solid base coat of Kantor Blue, applied as several thinner layers, came next. This should give me a sound starting point for my experiment. 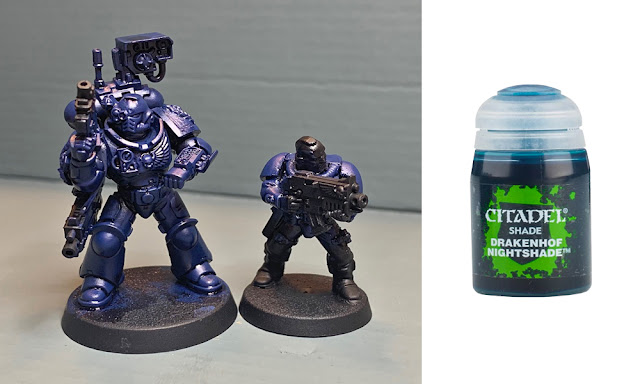 Step 3
Next came a liberal coating in Drakenhof Nightshade – my new favourite wash! It gave the blue armour a boost in saturation as well as darkening the whole model and settling in the recesses. 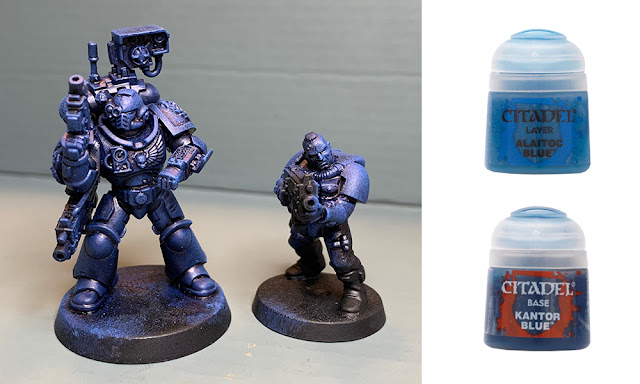 Step 4
Now, this was the fun bit. Unlike my previous sponge experiments, I used a very small piece of sponge (which pretty much meant it went all over my fingers!). I started off by putting the smallest amount of raw Kantor Blue onto the palette and dabbing it around with my sponge. I then dabbed a large proportion onto a wipe, so the application on the model would be subtle. I then slowly build up the layers of Kantor Blue until I had a nice balance. I then mixed in some Alaitoc Blue in with the colour still on my palette and continued the process. Finally I used pure Alaitoc Blue in some key areas.

What I find interesting is that the sponge physically won't fit into spaces that would naturally be in shadow, so it's pretty hard to go wrong. The only mistake I made initially was too much paint on the sponge and it swamped the model. The effects look a little bit like dry brushing in these close-up photos, but from the tabletop it looks quite smooth. 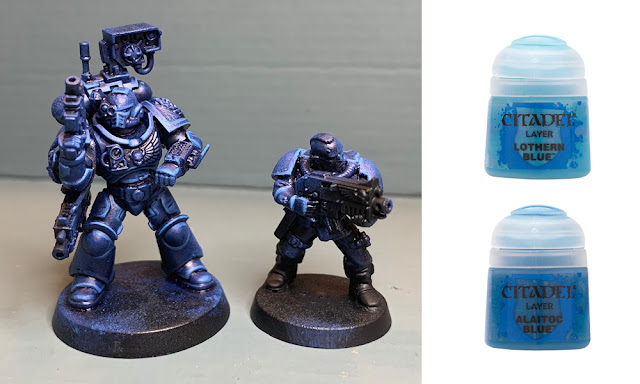 Step 5
Finally I added some edge highlights with a fine brush. I started with Alaitoc Blue and moved on to Lothern Blue. I may go back a do a couple of tiny off-white highlights. I was also considering pushing the highlights back a bit with another wash before re-applying Lothern Blue to the most prominent edges. We will see.

Again, the colours seem rather extreme close-up, but it looks quite smart on the table. My problem in the past has always been that I'm too subtle with the highlights – they look great up close but non-existent on the tabletop.

And that is it for the armour.

The whole process took about 15 minutes for these two models (excluding drying time for the wash). I just need to rinse and repeat for the other five members of the team and I can move onto some red, or rather crimson, fists!

Posted by The Dark Templar 6 comments:

Painting my Kill Team Terrain… with a Sponge! 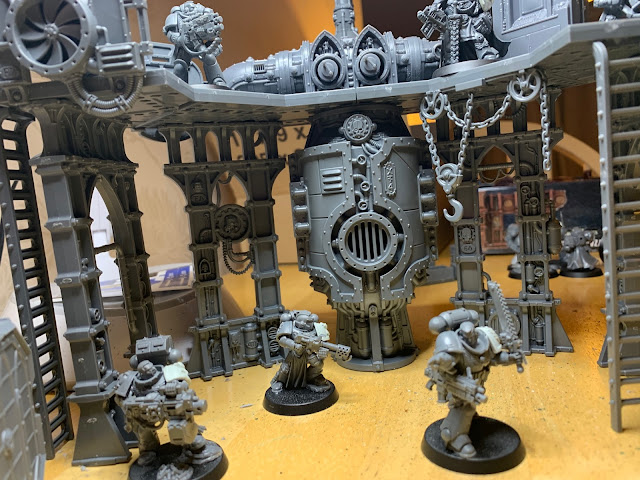 Having acquired a rather large amount of GW's Sector Mechanicus terrain for my new Kill Team board, I had to face the task I normally fail at – painting it all!

I no longer have access to my airbrush, so I needed to find a quick way to get some colours down that would also satisfy my nitpicking attitude towards details and 'looking cool'. I decided to go down the route of the sponge technique I'd used on my board.

I spray undercoated everything with Leadbelcher (what an awesome spray can that is!). Immediately things looked better. I then painted the area I wanted to colour up un Rhinox Brown. A couple of thin coats later we were ready to rock and roll. 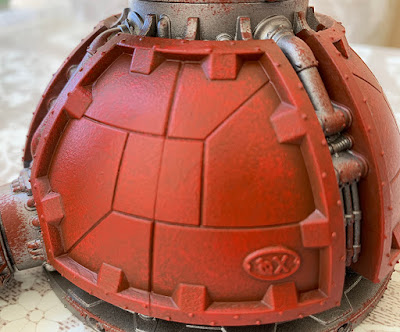 I started by mixing Rhinox Brown and Mephiston Red on my palette and began sponging the colour on, subtly at first but then I got bolder. I added more Mephiston Red and let the sponge do the mixing. The colour was beginning to focus around the central part of each segment, leaving wonderful dark shadows at the edges.

I gave the red areas a wash of Baal Red (now sadly no longer available) then, once thoroughly dry, applied more Mephiston Red, moving up gradually to Evil Sunz Scarlet and even a little Wild Rider Red. 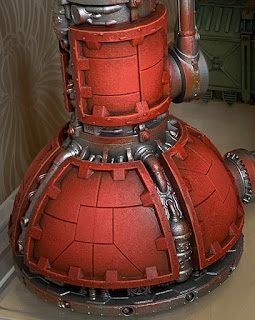 I retired the sponges and tried out some edging colours with a fine brush, going through my cycle of reds, and things were starting to look good. However it was not dark or dirty enough.

Next I touched up the Leadbelcher where the sponge had contaminated the metal with red, and washed the metal areas in Nuln Oil then, once dry, the whole thing in Agrax Earthshade, concentrating on the recesses and clearing the glaze away from the central highlight areas almost completely. Understandably I had to leave it 24hrs to dry! 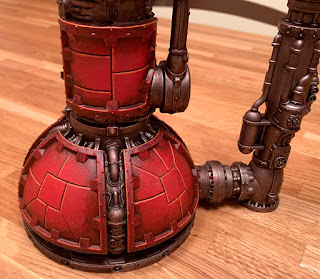 I was very happy now, but felt I needed to highlight the individual plates within each segment. Again, I cycled through my reds, but pushed on to a Fire Dragon Bright and even touches of a flesh tone (don't recall white one – Kislev?). I finished with some Agrax Earthshade in the recesses between the plates to add contrast to the highlights. 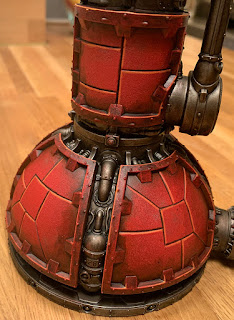 I'm calling these red sections done, except for maybe a huge stencilled number and sone distressing at a later date. The plan is to approach the metal parts in a similar fashion, getting the overall highlights to a mid-tone then some edge highlights quite bright.

I'm just happy that I'm close to my first piece of painted terrain in almost 15 years!!