War Looms On The Horizon 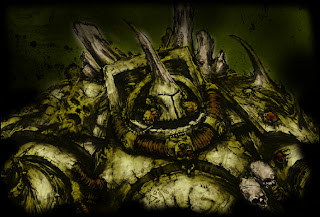 Typhus knew that time had run out.

Despite the stream of victories against the beleaguered Dark Angels, the forces of Nurgle had not taken complete control of the planet Cherbull.

Now the cavalry was coming and the Imperial marines would soon be bolstered by more troops and bigger weapons. Their battered spirit would also, no doubt, be lifted. This was the last thing he wanted. However, the situation was what it was.

Yes it's that time again. With something in the region of three weeks to go until my Plague Marines get to face Bull's new look Dark Angels, it's time to plot, plan and scheme. Time to mix things up again and throw a few curve balls.

Having read through the DA codex I'm expecting to see lots of heavy weapons, DA having regained the option of heavy weapons in 5-man units. With their ability to not scatter when Deep Striking, I'm also expecting to see Terminators, possibly dropping in behind my front line – something Bull would never risk before. I can also virtually guarantee some Scouts for objective grabbing, and a banner or two. I wouldn't be surprised to find a flyer in there also. But the big question has to be, will Belial be leading the troops again or could Azrael make a guest appearance?

The Dark Angels have lost 'And They Shall Know No Fear' and their ability to make combat squads, so there are some silver linings. The biggest problem I will be facing is the ability 'Bane of the Traitor' (or something like that) that gives +1 to weapon AP. This will make many close combat weapons AP2, threatening my Terminators and Obliterators no end.

Lots to think about. I need to stay focused on my own plan of attack and, should these threats appear across the table from me, have a strategy in my back pocket to negate them.