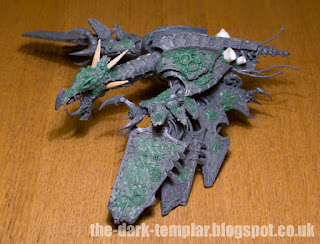 I've had a week away from blogging since the New Year making the most of my remaining holidays. Now it's back to work and back to the blog, so let's start with some greenstuff!

I learned a lot of tricks about representing Nurgle with greenstuff whilst transforming my Forgefiend, so intended to follow a similar line with the Heldrake. However, the Heldrake was going to need a lot more conversion, hence the last time we saw him he was looking a rather forlorn shadow of his former self. 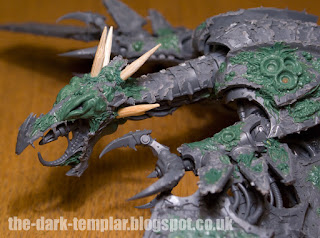 The head was always going to be the focal point of this model so I started there, adding back in what I'd taken away with the Dremel. On the left side of it's head I extended the area around the eye and tried to make it look like bone. I also added various horns and spikes (I know – I just cut them all off right!) to make it look more alive than the previous metallic incarnations. The rest of the left side had boils, diseased skin and Nurgle icons grafted onto it. I also added pock marks using the drill at various points on the wings, particularly at the ends. 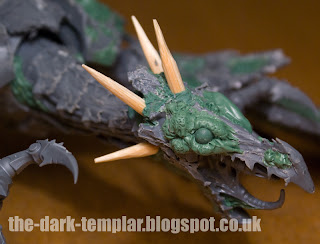 The right hand side of the head needed to be different. I created an eyeball and let it dry before adding bloated, diseased skin around the area. Spikes, boils and excess skin were added here, as well as something of a double-chin (not in photo). 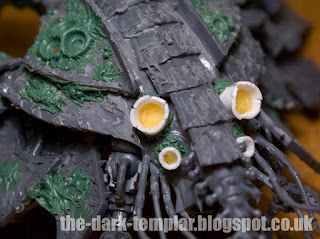 There has been a lot of negative feedback (from what I've read) about the unfinished nature of the exhaust ports on the Heldrake. The fact that you can see right inside the model does little to add value or quality to the piece, which is a shame. I decided I wanted to add some fungus pipe vents (as seen on Typhus' armour). I had to open up the holes to fit the size of plastic tubing I had; I then lathered the area in plastic glue and left it to dry. Once solid I went back and added greenstuff around the join. However, you could still see inside the model so, rather than use up a ton of my greenstuff, I glued in bits of sponge soaked in white glue.

So there we are. The Heldrake isn't finished yet – he needs more 'stuff adding down the right side. The model is starting to weigh a ton with all the added bits, but should look smart once the paint is added.