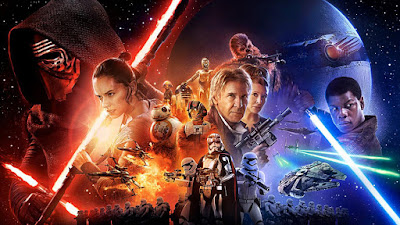 Last night I went to see the latest Star Wars film, with a friend of mine as the wife won't watch sci-fi. I'll admit to being cautiously optimistic going in. After the huge (overall) disappointment with the prequels you have to brace yourself just in case, but I liked what JJ Abrams did with the Star Trek movies so there was always the thought that maybe, just maybe he would be able to deliver on the monumental task of pleasing veteran Star Wars fans like me.

I'll do my best not to spoil anything about the plot for those who haven't seen it.

On the plus side, it's Star Wars so seeing something new is (almost) always a good thing. I liked the new characters Finn and Rey – they felt like heroes in the making, but not there yet – the BB8 droid was endearing and not annoying. Kylo Ren was great as the Sith apprentice, intimidating yet flawed, prone to immature tantrums with a lightsabre when things don't go his way. I loved his pseudo sibling rivalry with General Hux and their childlike moaning about each other to Supreme Leader Snoke. The humour this time round actually brings a smile to your face rather than the childish slapstick from the prequels. The aerial battle scenes were superb and made great use of the 3d, took your breath away at times. Oscar Isaac was very cool as Poe and came across as a real heroic type for the new kids to look up to. Great stuff.

On the downside well, I love a great baddie but I thought Captain Phasma was a waste of space. He/she/it sounded just like Gwendoline Christie (funny that!) and therefore Brienne of Tarth, coming across as rather feminine which undermined any Boba Fett-style smouldering intimidation that may have been generated up to the point words were spoken. I thought this character was going to be an ace in the hole for the First Order and a real nasty git, with a James Earl Jones type voiceover, but no. The oldies were back and I'm not sure it brought a lot to the party except nostalgia. Harrison Ford did a good turn as Han Solo, but looked very old and a bit past it. Leia didn't seem to contribute much except as an emotional foil to Solo. Luke Skywalker was absent for the bulk of the film, since he was the treasure everyone was trying to find, though his appearance when it came was high impact and very jedi cool – he didn't need to say a word. He will no doubt play a bigger part in the later film(s). Chewbacca probably came out the best of the old crew, the sarcastic looks and 'comments' often the centre of the comedy.

The only other thing that niggled a little was that at times it really felt like a Star Wars reboot. There were a lot of things that gave me a feeling of deja vu and were very much a nod to the first three films. We had our heroes running around a pseudo Death Star trying to disable the shields and escape. We had trench runs in X-Wings. We had a desert planet, a forest planet and a snow planet all in one film. The only thing missing were Ewoks, Hutts and Wompas.

I had picked up on one spoiler, very early on whilst they were still filming, and unfortunately it turned out to be true – though you could see it coming a mile away regardless, the plot was very predictable.

All that being said it was a worthwhile visit to the cinema. It won't win any best picture oscars but it was a non-stop emotional ride with plenty to appreciate if you're a Star Wars fan and a lot of fun even if you're not. The characters, both good and bad, developed nicely over the course of the film and set things up nicely for Episode VIII. Definitely worth a watch and a hell of a lot better than the prequels. None of the characters annoyed me, which I wasn't expecting – C3-PO came close but luckily didn't have too much screen time. It felt like Star Wars but with a twist and I came away feeling rather upbeat yet contemplative. It wasn't as epic as I was hoping for, but I think that will come in later films. As a starting episode this did a good job and I look forward to seeing it a second time to take more of it in.