On the morning of New Years Eve, Bull and I finally got our introductory game(s) of Guild Ball. It's always exciting trying out a new game for the first time, especially after poring over the rules for weeks before. This was no exception. 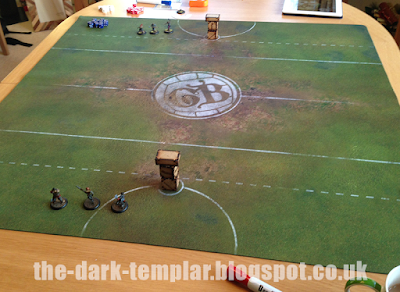 I had my Guild Ball gaming mat and everything was quickly set up to go. I brought my Butchers, sadly no further painting had been done but there was at least three colours on every model. They are suggested as one of the starter teams as their rules are very straightforward. This would prove to very much be the case. Bull's Masons were well armoured with plenty of tricks up their sleeves. They would however take a little more getting used to.

Opening games are usually quite cagey affairs so I decided to jump in with both feet and see what happened. I knew my team gained momentum by inflicting hurt on the opposition, not playing with the ball, so immediately started to weigh into the Masons. 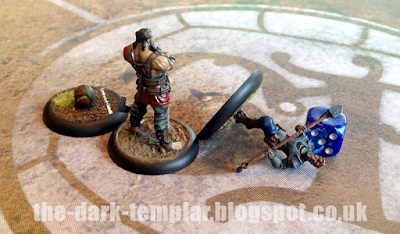 I managed to get my first 'Taken Out' result against Bull hard man Mallet, two points on the board. The game ebbed and flowed a little as we made inroads and got rules a bit wrong here and there. Eventually I managed to get the ball to Brisket who scored a cracking goal to bring the game to an end. 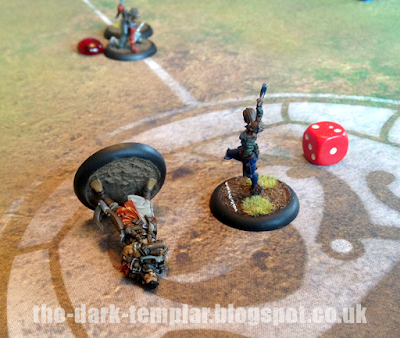 Bull had picked up a few ideas in the opening game and came charging out of the blocks for Game 2.
I managed to take out Harmony early on for a couple of points, but Bull was a man with a plan. 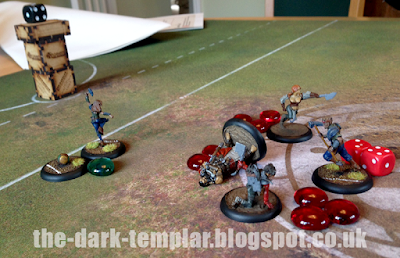 He eventually got the ball behind my lines, managed to get the Momentum Point he needed and had Honour clear on goal. 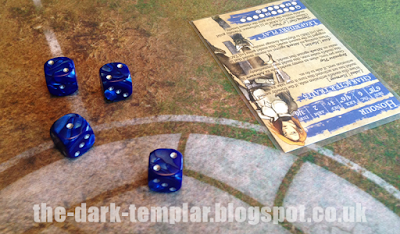 Alas, in his moment of triumph, needing to roll a 4+ with any one of four dice, his little blue dice failed him and he missed.

The Butchers went on to inflict more damage, taking out two more members of the Masons team and racked up the required 6 points to end the game. 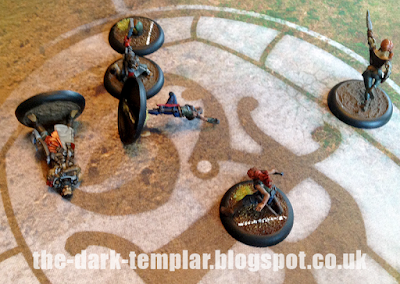 This was an odd one. I kind of got too cocky here and my team ended up running around as individuals rather than taking advantage of the benefits of working as a team. Bull revised his plan and I spent the next hour reacting to him for the most part.

Again I managed to take out Mallet to get two points on the board, leaving only Honour and Harmony in my half to try and score. On several occasions Bull came within a half inch of being able to take a shot, but it wasn't to be. The one time he was in range he didn't have enough Momentum Points to actually take a shot. Things were just not going his way. Then I took out Honour.

Harmony and Brisket had a hilarious turn of taking the ball off each other several times, before the Butchers striker got the ball away to the waiting Ox. 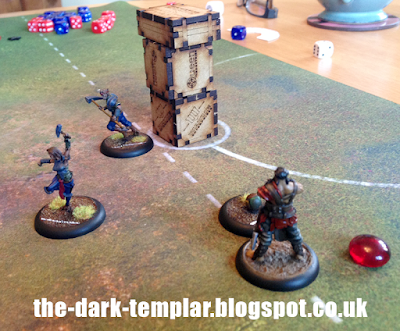 He made his way down field but the patched up Mallet and Honour were waiting for him by the Mason goal. He barged Honour out of his way and took the shot, scoring the goal to end the match.

So not a very successful day for Bull, and something of a stroll for the Butchers at times it must be said. The reasons are quite simple. The Butchers are straightforward to play, can still persevere as individuals, and dish out a lot of damage. The Masons are more of a machine, working together as a team to get the job done. They can't go toe-to-toe with the Butchers without coming off worse, so have to play to score. It'll take a little time for that machine to start humming but I've no doubt Bull will get them scoring soon and my one-trick pony will feel the hurt.

Plus we were using starter box models, so we have a host of new players and mascots to introduce, not to mention playing with a team of six models instead of the three we used this time.

The game itself is very interesting. We were expecting something along the lines of Blood Bowl without the gridded pitch. Not so. This game has far more in common with Malifaux than Blood Bowl. Warmachine has openly been quoted as a source of inspiration and you can see that through a lot of the mechanics also.

Lots to take in after our opening day, lots to contemplate and analyse. Expect more games soon as we look to take this one up a notch.

Now, where did I put those other Butcher models?