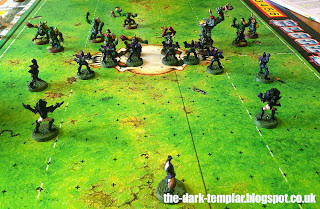 The Orcland Raiders came down to visit the fledgling Dark Elves, to see what they were made of. This would be a new experience for me against the old adversary. I knew that the Orcs were bruisers and that, whilst more agile, the Dark Elves didn't have the strength to go toe-to-toe with the greenskins.

I had done a lot of reading, podcast listening and theorising and I had a (basic) plan. We would be receiving in the first half which was good. We also got a healthy dose of inducements so I took some extra training (for an additional re-roll) and some babes (for a dice roll bonus when recovering from a knock out).

By the way – you will see two Witches on the pitch who as actually posing as Blitzers, in case it looks confusing! 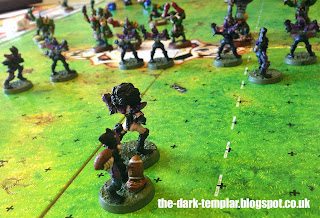 Things started well. We got Quick Snap on the Kick Off Table and my team got a free move. We backed off the Orcs on the line of scrimmage and moved closer to the ball.  My runner picked up the ball first time and even managed a cheeky pass to the nearby blitzer – first SPP for the Dark Elves! 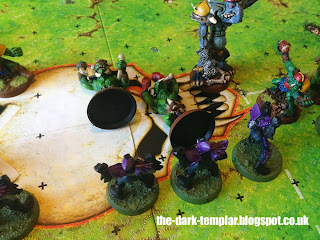 The Orcs were restricted to a single Blitz move during their opening turn and in my next turn I managed to down their two newly-skilled players. Nice. 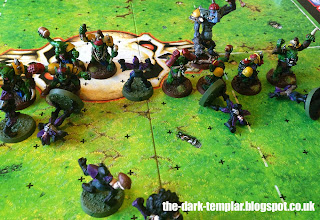 However, the Orc retaliation was immediate and soon Elves were down across the pitch. 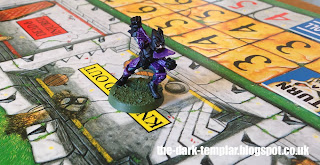 It wasn't long before the first Dark Elf casualty – one of my precious Blitzers – a bitter blow. Going into turn 6 we still had the ball and had backed off the Orcs and edged our way to the left side of the pitch. I found myself rather boxed in so sent out some linemen as potential receivers and to draw away some of the Orcs and open up gaps.

The Orc noose closed tighter around the ball carrier and I was forced into some radical action. After some neat dodging out of tackle zones and lucky one-dice blocks I had opening up an opportunity to pass the ball to my Runner (out of the above shot to the right).

It was all looking good and there was a single Black Orc needing 6's to intercept the pass.

Guess what… he rolled a 6 to intercept the pass!

Panic ensued on both sides as the Orcs tried to muster around the less-than-agile Black Orc, breaking up tackle zones, and the Elves hammered back to try and stop the touchdown. 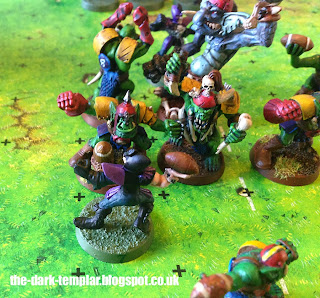 The Black Orc managed to hand-off to a Blitzer and it was pretty much over. I didn't have the bodies to stop the score in turn 8 of the first half. With three players off the pitch and the touchdown all but guaranteed, in hindsight I should have let the Orcs score on turn 7, allowing my knocked out time to recover for the second half.

The second half threw us a curve ball from the off, with a pitch invasion that hurt two players from both sides. Already having several players off the pitch, this was bad for me, left with only six elves on their feet.

I tried to kick the ball deep into the Orc half to at least spend some time on the other side of the half-way line. Alas the scatter came up maximum distance and the ball went out of play, meaning that Bull could give the ball to anyone he wanted to. 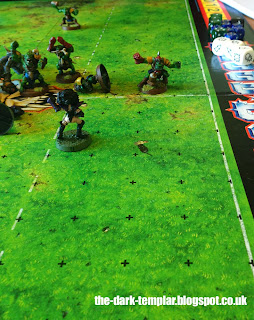 He gave it to the Blitzer on the halfway line who had an almost clear run to the endzone. 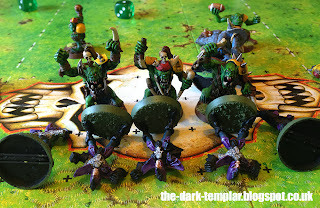 This was made even more difficult to defend as the Orc front line decked my three linemen. 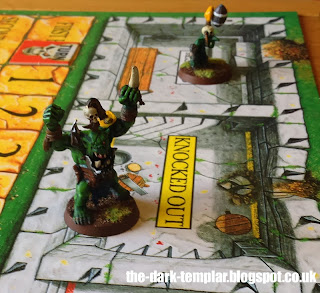 The Dark Elves rallied to stop the score and even managed to knock out a Black Orc – our first casualty points of the game! 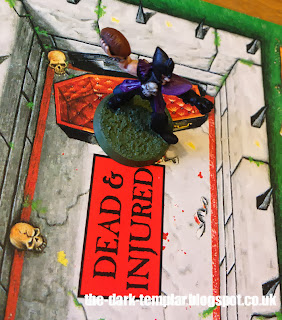 However, the Orcs were determined and my Runner became the first major Elf casualty. This was bad, very bad. Try as we might, the Orcs strolled in for their second touchdown. Stupid, stupid, stupid.

We managed to get some of our players back for the kick off, but without the Runner I was concerned that I wouldn't be able to score easily. Despite their knocked out Black Orc, the Raiders had the Gobbo to bring on as a substitute. He could also prove to be a pain, able to ignore tackle zones when dodging.

I was slowly learning that this Elf team was also about the Dodging and options that I would not have entertained as an Undead coach, became the bread and butter of the Dark Elves. 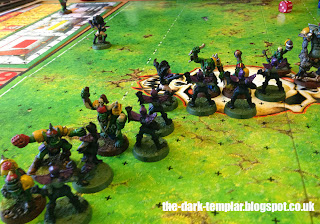 We received the ball well and I took it closer to the line of scrimmage, creating a pocket for the Blitzer ball carrier. A slight gap opened up, presenting an opportunity, albeit risky. I decided to go for it and sent the Blitzer through, achieving maximum Go For It moves for an additional 2 squares. Despite being horribly exposed, I had done as much as possible to bog down the Orcs and get as far away as I could with the ball.

However, Nuffle decided that the Orcs are still his favourites, and Bull managed to get a single Blitzer to Go For It enough to get a hit on my ball carrier. Downed and the ball spilled a couple of squares behind, against the touchline.

I sent in reinforcements to create a cage around the ball and the Orcs moved as fast as they could to counter. Anything could happen now!!

I had left the tiniest of gaps in my cage and, as I had predicted, the Gobbo skipped through and picked up the ball. He was immediately downed – out of play and into the crowd. The ball bounced "miraculously" into the hands of a nearby Orc Blitzer and he got pushed into the crowd too. 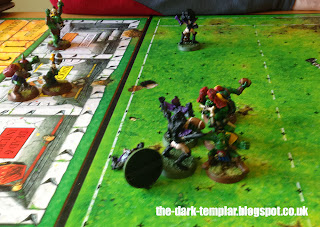 More Orcs pilled into the fight, but my original ball carrier Blitzer nipped in to get the ball and ran towards the endzone. Had I done enough to tie up the nearby Orcs and allow the Blitzer to score?

Try as he might Bull couldn't get his marauding Blitzer Karfu (remember the name!) – who had already racked up 4 casualties – to the Dark Elf in time. 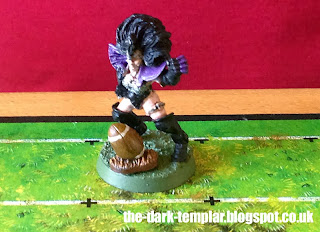 We played out the final turn. I managed to get a free Blitz turn as part of the Kick Off and we went straight for Karfu in the hope of doing him some damage. It was not to be, and the game ended.

We had lost, but there were positives to take from the game. I had scored my first touchdown in… years, and I was starting to see how the Dark Elves worked.

Alas, we had paid a heavy toll by the end of the game. We were lucky with our injury rolls, but the Runner will miss the next game (leaving me a man short) and one of the Linemen  –  Tarud Shademaw – was reduced to Strength 2, which is rather devastating. I also rolled badly on the winnings, so don't have enough to buy in new players. The hero Blitzer of the game managed to get a new skill – Dodge – which will be invaluable.

However, the Orcs racked up lots of SPPs and have now reached a point that they will be somewhat unplayable with my Undead and Dark Elves. They have a lot of skills and will only gain more again my struggling teams.

We're hoping to entice another player or two to join us – are you listening Michael? – and Bull is switching to a starter Skaven team for the next match, so things should get interesting.

My thanks to Bull as always for being a great opponent and sportsman (and not taking the foot off the pedal even when winning), and for braving some awful driving conditions to visit.

Thought and conclusions to come soon…