With the week evolving into what can only be described as a whirlwind, peaking today, the prospect of some gaming tomorrow is most welcome indeed. However, due to a packed schedule it's an earlier kick off than normal – though I'll be awake early on game day anyway… I get so excited!

After the disappointing 2–1 reverse against the heavyweight Orcland Raiders last time out, the Daggeroth Darkblades will be looking to cut their teeth proper against the newbie Boomtown Rats.
However, Bull is mighty on the Blood Bowl pitch so I'm not expecting an easy time. He has no doubt done his homework and had a few training sessions with the (rat)boys this week in preparation. I will have to bring my A game. I am however hoping for fewer casualties on the elf side given that we are the (marginally) heavy hitters this time.

Unfortunately the Dark Elf roster took a bit of a kicking against the Orcs last time out. My Runner will miss the game tomorrow and I had to retire a Lineman who had been reduced to STR 2. We will be taking a couple of Journeymen as temporary replacements, which is not ideal but far from bleak. I learned a lot from my last game with the Elves and so will be trying to maximise my Star Player Points against the Rats. I'm also hoping I manage to play the team like the Elves they are, not the Undead I'm used to. I do now have an AG 5 Blitzer which will be very interesting.

I've spent a lot of time since the last game listening to Blood Bowl podcast wisdom, Three Die Block especially. I think I understand many aspects of the game better, not least team management, skill choices and inducements. 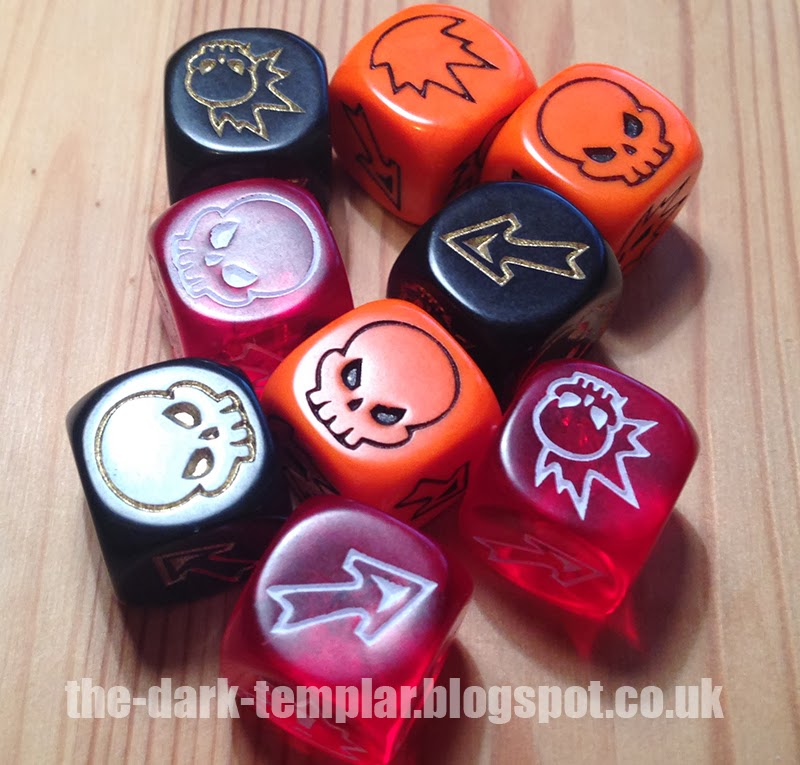 However, my secret weapon arrived this week and will debut tomorrow – my very own NON-WHITE block dice. They took a while to warm up in the practice rolls last night but they're looking good now. Let's hope they allow me to shake off the white-dice hoodoo that has plagued me my gaming career, highlighted not least in the epic-ly dire dice-rolling of the two Undead matches.

Stay tuned for a full match report over the weekend!