Blood Bowl: In The Dugout

A bit of an update now, behind the scenes at both the Gutchewers' and Darkblades' camps.

With a game on Saturday against the newbie Boomtown Rats, attention this week has been on the Darkblades… or rather the new-look plastic Darkblades. You may have seen the first completed model, Adin Heartrender last week. Needless to say the rest of the Blitzers and Linemen are being finished.

However, construction was paused to allow the Darkblade Runner, Rakiri Razorwing, to make an appearance. Currently out of action due to a broken rib, Rakiri is recovering nicely… 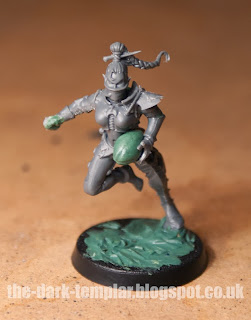 The basis for this model is a plastic Dark Eldar Wyche – nothing complicated about that. I cut the left arm at the elbow and trimmed the shoulder joint the allow the arm to be positioned at a more obtuse angle.

A football was created out of greenstuff and positioned on the hip, dry-fitting the forearm to ensure a good angle, etc. I gave it an hour to start curing before gluing the forearm into position and filling gaps in the elbow. I also trimmed all the fingers off the right hand – she had been holding a pistol and her trigger finger looked odd – and replaced with greenstuff, pressing into it to indicate a clenched fist and thumb. 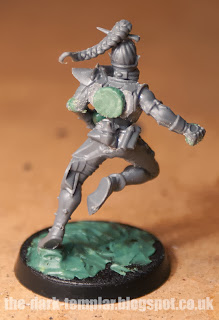 On the back I trimmed off the sci-fi backpack and added a disc for her player number. Because the Wyches come with tabs at their feet and slotta bases (and I wanted to add a penny weight underneath a standard base) I had left a block of the tab to ensure a more solid join on the base. I disguised this with leftover greenstuff and made the base surface uneven, ready for texture.

She's almost ready to be painted now, which is rather exciting.

Over in the Gutchewers' camp, yesterday's mystery player revealed himself.

I've realised that the reason I've struggled to score with the Undead team is because none of the models are actually posed holding a football!… makes perfect sense.

With that in mind I made a couple of Christmas purchases, the first of which arrived yesterday. 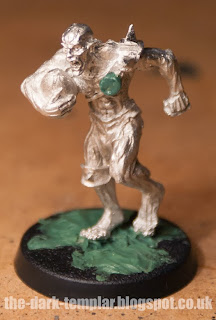 This is my new Ghoul player. Originally he was bought to represent the Undead star player J. Earlice, but I can only add him to the roster as an inducement so it won't happen often – he will probably start life as a regular ghoul.

The model came from Heresy Miniatures and was sculpted by Paul Muller and Andy Foster. It is beautifully detailed (if something this rotten can be considered beautiful) and I'm really looking forward to painting him up in the Gutchewers' colours. As you can see I've added a small disc to his strap for his player number, but he's ready to go!