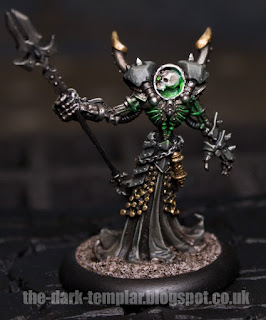 I had a revelation a few weeks ago that I was about to attend Salute 2013 yet many of my purchases from the previous year's show were untouched. I primed a few of my Warmachine models in the hope of getting some paint on them relatively soon. Top of the list of 'easy wins' was my Cryx caster Asphyxious (or Gaspy as he's often referred to in the community). There are many versions of this character but in this instance I was painting classic pGaspy. He has a bit of cloth, a bit of armour and the rest metal skeleton – an ethereal Necron if you like.

I had painted the cloth 'skirt' a few weeks ago – my trusty Cryx Bane Base and Cryx Bane Highlight method being used as it should. When I picked up the model again last week I basecoated the metal with Vallejo Oily Steel and washed it with Black. Rather than go black for the armour, as might be the obvious choice, I went with my Cryx Bane scheme again – you can never have too much practice. The painting on this model was quite straightforward and nice to do in a casual frame of mind. However, I wanted to try out the green lighting that is seen in the officially painted Cryx models and this meant a go at Object Source Lighting, which up until now I've avoided like the plague. 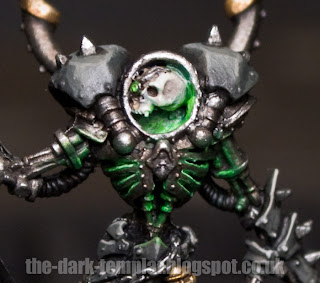 Given that this will be a gaming miniature pure and simple, I felt under no pressure at all. It was nice to dabble with the day-glow green paint I bought for my Plague Marine plasma weapons a couple of months ago. The final result is alright – I'm pleased – it's not perfect but I don't mind. It was nice to play around with the green and white paint, covering an area in green then knocking it back with the basecolours. I'd be quite content to have another go at this, which is good as all the Cryx models will have this green glow to some extent.

Old Gaspy here is not quite finished – his staff needs some highlights and a bit of extra colour. I have to say though that he has been a welcome distraction from Romans and Vikings, as well as being an enjoyably casual painting project.

Hmmm, what to paint next…?!