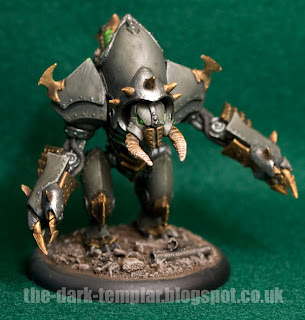 Given that it's been over a week since the last blog post – something that hasn't happened in a very long time – I thought that I should show my face.

The last week has been quite trying from a personal perspective; there have been several visits to hospital and lots of relaxing – little time to sit and paint in isolation. However, painting has occurred and here we go…

After the introductory game of Warmachine I was inspired to add more paint to my Cryx 'jacks. As you can see the Helljack is almost complete (top photo), just final touches here and there. Having painted up all his armour I had fun with the day-glo green paint, lots of layers and inks (more photos soon). 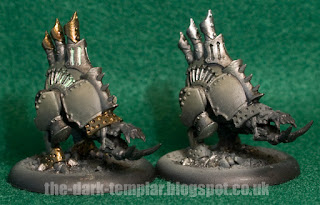 The Bonejacks are a little way behind but the two Deathrippers have seen paint this weekend. One is prepped for his green glow, the other has just had some metallics done. They're slowly starting to look like the making of an army. Exciting times. 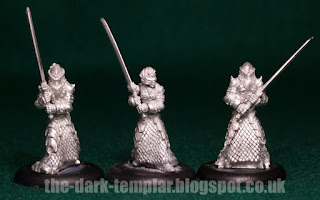 Elsewhere in the Warmachine/Hordes universe I've constructed my first three Legionnaires for my Everblight army. Not necessarily the best unit choice for Legion, these guys do look very cool and should be quite straightforward to paint. I have another three waiting in the wings but looking forward to getting these guys finished first. They remind me of the GW Dark Elf Executioners, who similarly looked cool but fell a little short on the gaming table. If I refer to these guys as Executioners by accident in the future you'll know why.

As you know I've been spending a lot of time on my secret project with Romans, Vikings and Celts. In a battle last week with Fugs some heroes have emerged that required a little extra paint attention. 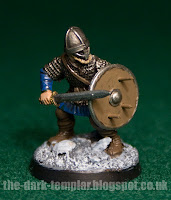 After being skewered in a number of games by Roman pila, this Viking hero has been dubbed Ragnar Pincushion. Some alterations to the model were required (arrows in the shield) and he got some more paint and some blonde streaks. His fortunes haven't improved much since but there is hope. 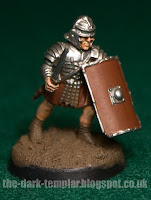 This Roman hero is Crixus. He has played a major role in Fugs' battles this last week, yet only had a black undercoated to wear for the entire campaign. After skewering poor 'Ragnar Pincushion' and holding the line against marauding Celts, Crixus had earned some new paint. Whilst still not amazing to look at, he does now fall in line with his fellow legionaries.