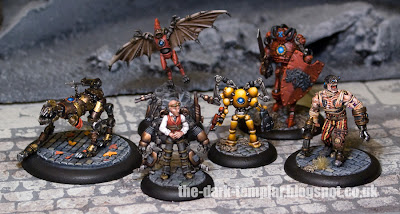 As post number 100 for this year it is only fitting that it be a cracker!

As you know, just about a month ago A Tale of 3 Painters charity project was started. We managed to finish painting our models in around three weeks and here they are, finally united once again.

I'd like to take this opportunity to thank my fellow painters, who donated their time, effort and paint to complete this project. I think you will agree that, despite three different people painting two models each in isolation and in their own unique style, the finished miniatures looks remarkably cohesive and are a crew that anyone would be proud to own and game with.

C. Hoffman himself is nothing short of wondrous. It's only when you see him in person and realise how small the model is that you can truly understand what a superb job Andy did to maintain the level of detail he has. The fragile nature of the harness made for a tricky job, but the finished model really is the focal point of the crew.

The Mechanical Attendant, with his bright yellow armour, is a great contrast as Hoffman's totem. The idea of him being a twisted version of C3-PO with a gun has come to life. Despite being a similar size to Hoffman, the model didn't have nearly as much detail and allowed me the opportunity to use an extended range of paints, washes and inks to achieve a yellow that was bright but not garish, in keeping with the world of Malifaux.

Ryle (Hoffman's mutated brother) is a great mix of meat and machine. He is also quite a large model, full of details, giving Michael quite a task. Tackling it head on he even added stripes to Ryle's trousers, which is so accurate it's not obvious at first that it is completely freehand. The final result is a character that looks truly tormented and is so wonderfully painted it makes him a must-have in your crew list. The foliage detail on the base adds another dimension to the character, as he stalks his prey through the streets.


The Watcher, flying high above the city, is a bit of an odd one out. The very nature of the character meant he needed to be on a different base from the rest of the crew. With this in mind, elements of plastic ruins were used to build up the base and add height to the model – implying it's battlefield drone-like nature – and the base weighted. Andy has managed to create great contrast between the metallic body of the machine and the leathery texture of its wings.

The Guardian is possibly the tallest model of the crew (excluding The Watcher). He is Hoffman's bodyguard and in my mind represents The Guild completely. With this in mind I went with strong red armour. The fact that he is likely to take more punishment on the battlefield than anyone else is highlighted by the scratches and scrapes on his body and shield. His blue glowing eyes and power cell, which contrasts so much with the red armour, hints at the power and strength within.

The Hunter is another unique model, who is more at home stalking the enemy from the shadows rather than combining with the rest of the crew en mass. Michael has managed to hit the nail on the head with his more metallic approach. He has created a striped effect along the machines body with alternate use of brass and bronze, which also reflects colours in Hoffman's harness. He definitely looks the most aggressive of the machines in the crew. The addition of autumn leaves to the base adds some colour without compromising the tone. 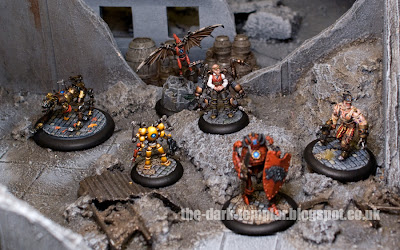 So that's the crew complete!

The crew is travelling to Plymouth this weekend to participate in a game against Joey Berry on Monday. I will be making pitstops in Westham and Swindon to meet up with Michael and Andy, to let them see the final crew in person and to have photos. In addition to Joey's video of the game itself, I hope to add a video diary of the entire trip.

The models will then go up for auction on Wednesday 5th September, together with all the additional goodies donated by our very generous project supporters. I will be going through these additional items in detail before the auction.

Hope you enjoyed our project – if you did please donate. If you want a recap of how we each went about painting our models see the links below.

Now we get to give it all away, which I have to admit is going to be really difficult!!

As much as we are having fun working on this project, it is for charity. If you enjoy reading about our progress please donate towards our final total – even if it's only £1 – via the donate button at the top of the page or on the Cancer Research UK website directly.

What's A Tale of 3 Painters all about?

Thanks for your support!