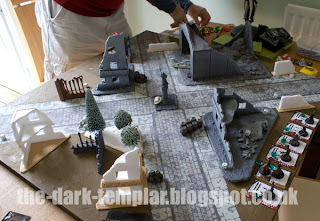 As the Tale of 3 Painters project draws to a close – my two models are complete, Michael's two arrived on Saturday morning and Andy's are in transit – thoughts turn towards the scheduled game against The JoeyBerry next Monday. Given that I haven't played Malifaux properly in six months I thought I'd make use of the Bank Holiday weekend and arranged a game against Bull.

I had banked on it being like riding a bike – you never forget how it works or what you're meant to be doing, it just takes a little time to get back into the swing of it – errr…no!

I had totally forgotten what I was meant to be doing – even the fundamentals – and we played like two people who were learning the rules for the very first time. 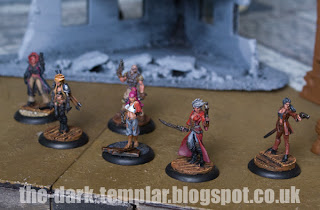 Bull was intending to play Seamus and his Ressers but had left the cards at home. He decided on the Viks, with the addition of Von Schill who neither of us has seen before. I went Guild but for some reason thought that I would take Sonnia as Bull had never played against her before and she always seemed to do well. Unfortunately, Bull's crew had almost no spell casting so most of my crew's funky anti-magic abilities were rendered useless. 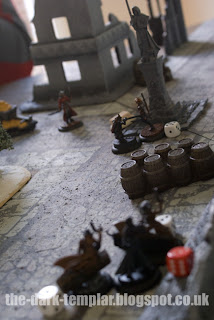 Bull took the initiative early on and threw Von Schill down my throat – despite multiple Fire Blasts and gun shots he would not die. In the end he managed to kill a rather hesitant Sonnia with ease. Santiago Ortega and The Judge made their way to the centre of the board to confront the Viks and pick up the Treasure. Alas they both died without getting off a single shot or swing of a sword. It was left to the Witchlings to step up. I managed to take out Sword Vik with a couple of exploding minions and a hand full of wounds off Von Schill, but that was it!

I had not even got to the treasure or close to achieving my schemes, meanwhile Bull's Wagon trundled to the centre of the board unhindered. Bit of a disastrous game for The Guild (the worst I've ever played if I'm honest) – it began with crew selection and went down hill from there.

However, we had a laugh and it helped to refresh my memory with Malifaux basic rules – mission accomplished!
Posted by The Dark Templar