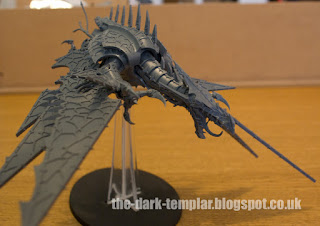 The above image shows my shiny new Heldrake that made its debut in a recent game against Bull's Dark Angels.

I'd been horrified when I first saw the model but have to hold my hands up and say that it has grown on me… a little. Its abilities in-game made it a must-buy model and so, with some reluctance it has to be said, I parted with my cash and built the Chaos flyer. 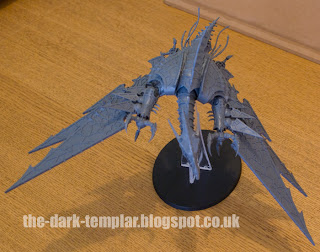 It had a reasonable debut, but the implied threat was far worse that what it actually achieved on the day. I went home pleased with my purchase, but the model itself has always bothered me and I promised myself to make it more suitably Nurgle when I got the chance.

It was never going to be pretty but this is how I trashed a £40 model!

The first thing was that it's all too spikey. The front wing is so long it often catches on the table, so that was another issue. The 'veins' that appear across the various surfaces was also too fussy. it all had to go. The flyer looks very Khorne-like in its natural state but that goes against everything that is Nurgle.

I dug out my Dremel, found my box of accessories and spent the next hour chewing the plastic to pieces – literally. 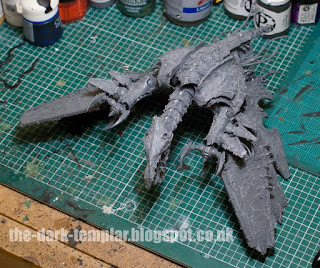 …and this was the result.

A very folorn specimen, looking very sorry for itself. I have to admit it did cross my mind that I had gone too far. However, you have to have faith in your convictions. At the end of the day, no matter how trashed the model got, it would look infinitely more Nurgle-esque.

I set to with greenstuff in hand to pull the model around… but that's for another time. 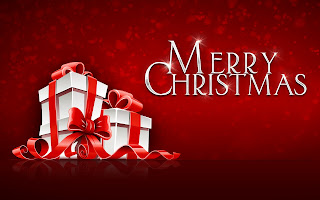 To everyone out there in the blogsphere who has visited the site in the last year I say a big thank you!
I hope everyone enjoys the holidays and gets what they want from Santa – Merry Christmas everyone!!
Posted by The Dark Templar