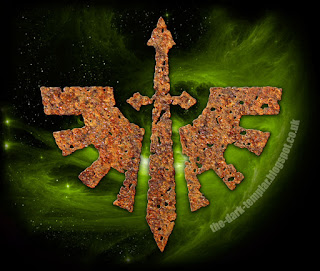 So here we are again.

Bull has given little away in the run up to this next game, whilst I have leaked some of my new additions. Belial has returned from the dead, though not the same man he was. The heroic Command marine, who wounded Typhus, has also had a weapon change but could be on the verge of jumping ship to the dark side!

My Predictions…
This time I expect to face something a lot more straightforward than last time, despite the game size increasing to 1750 points. I have no doubt the Aegis Defence Line and Quad Gun will make an appearance. Bull will be keen to take down any flyers that might appear after the potential shown by the Heldrake. It wouldn't surprise me if I saw a flyer on the Dark Angel side of the board either, but I don't think Bull's had the opportunity to buy, build and paint one yet – he still has Saturday morning though. 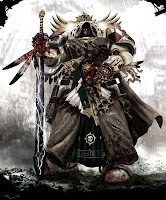 HQ
I don't think Bull will go with two HQ choices again. However, Belial needs the Land Raider and his Terminators to be truly effective – will Bull be prepared to sink so many points into them again? The alternative scenario is that Bull will leave the Deathwing master at home and take someone else. Not likely, Belial is the man… and a man looking for revenge. I predict the return of the Deathwing in force.

Troops
I'm expecting lots of Plasma this time. The Dark Angels suffered last time for not carrying such a potent anti-marine weapon and Bull will be keen to not repeat this mistake. He will set up behind his line and wait for me to march on him – mission allowing – which is how I expected things to be in the last game. The gun line from hell! A Razorback and maybe the odd Rhino for mobile cover could also be the order of the day, especially if the Dark Angels have to advance at all.

Elites
There will undoubtedly be a Dreadnought (or maybe 2) in the Dark Angel list, especially given the game points increase. I'm guessing Assault Cannon and/or Autocannons. I'm not overly concerned with this level of firepower but the close combat threat can cause problems. I'd like to say there will be no Terminators in this game but, as I mentioned above, I actually think there will be more of them. This time around they will sit tight and be a counter-assault threat. 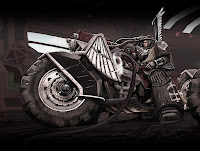 Fast Attack
The Speeders will no doubt make a return. They are pesky, but you can't ignore them else they will find the side armour of your vehicles. Even Bull's Multimelta Speeder has to hit at some point in time – neither his MM Speeder nor the Multimelta on his Land Raider hit once in the last game, despite several turns of shooting. Bull also owns a host of marine Bikers but I don't think we'll see them in this game.

Heavy Support
The Vindicator tank was a pain last time and will no doubt make a return. The S10 large blast template is a threat to everything on my side of the table and Bull will like that. I also expect the Land Raider again. I struggled with the high armour on this vehicle, never mind its contents, and that will be another plus Bull took from the previous game. Devastators will certainly be a part of his defence line – they were built and painted a while ago and Bull will be itching to give them their debut. He knows that the heavy gun line works, so I expect to see a wall of heavy weapons when he deploys.

So there we go, that's my initial thinking on what the Dark Angels will bring to the table. I think regardless of the overall composition, the army will be much more competitive – especially now we have a 'proper' game under our belts.

I've had an even more extreme idea. Bull has recently hinted at The Fallen, a project I know he is very keen to do. There is the vague possibility that Bull might field an all-Fallen army, full of Chaos units!!