A Talon In The Darkness 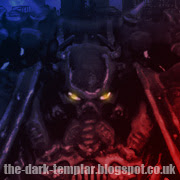 Talon was a freelancer.

He had been a Chaos Warlord for millennia before he discovered the ways of the psychic. He had spent centuries in isolation studying and learning everything he could. His power was immense and he considered no man his equal. He refused to align himself with any one power – he wanted it all – staying neutral to all the chaos gods, yet taking their individual blessings when he could.

Once he emerged from his self-imposed solitude he was truly a master of the malevolent, offering his services to the highest bidder. Alone, Talon was an assassin of unmatched ability; with an army at his side he was truly unstoppable, 'inspiring' troops to lay down their lives for their master.

He had fought alongside Typhus many times, so when the call came he responded without hesitation. Typhus wanted him to lead the main push in the invasion of the planet Cherbull. Talon did not know what the dispute was about, he did not care. He would get to flex his psychic muscles against an unknown foe and prove his mastery once again.

In addition to all the other new models on the painting table we have a new character, ready to take the fight to the enemy. (I may finally see my dream of fielding a Sith Jedi realised!)

We also have a date in the diary – Saturday 15th December – to aim towards.

Settle yourselves down and prepare for more banter and pre-battle fighting talk, not to mention sneak peaks of the troops that will take to the field!