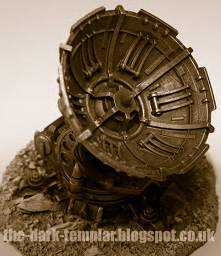 With the Dark Angel leadership licking its wounds, the next phase of the invasion was to take out their communication capability. The Imperials would be keen to hold onto this as long as they could, increasing the possibility of someone hearing their cries for help. Talon would silence their cries once and for all.

He used his influence as Herald of Chaos to gather together an army like none seen here before. Daemons were coming to aid him and they would all but ensure a swift, successful conclusion to the assault. Only their decrepit god could help the Imperials now… 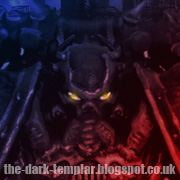 Bringing the pain…
It's no secret that I will be fielding a new, somewhat experimental HQ choice tomorrow. At present my Sorcerer remains the only model in my lineup without any paint on him, but he should look more the part come game time.

As much as it might be more advantageous or Jedi-like to have given him the Mark of Slaanesh (for increased Initiative) or Tzeentch (for a 3+ Invulnerable Save), I have stayed true to the character of this campaign so far and given him Nurgle's blessing, making him Toughness 5. This won't help him against Ordnance blasts or Dreadnoughts but should filter out some of the bolter and normal close combat hits.

The main downside to taking him over a Chaos Lord is that any Plague Marines I may decide to take will not be Troops, they will remain Elites, even if he has the Mark of Nurgle. This means I will have to take additional Troop choices, even if just to fill the slots. Alternatively I bin the elite Plague Marines and just go basic Chaos marines, but lots of them! 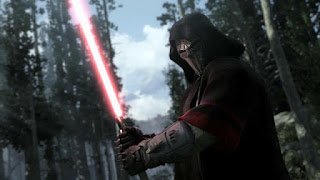 What I have decided is to make him a Level 3 Psychic which will allow him to roll 3 spells, although one will now have to be from the Nurgle list. I'm hoping that he can manage to pick up something to augment either his own abilities or those around him. With a bit of luck that should offset the fact that he only has two wounds.

I've also given him a mutation which gives me the possibility of rolling something quite funky like an additional wound, Toughness 6, increased Initiative, improved save or Eternal Warrior (no instant death). Now that's a lot of ifs, buts and maybes for a general to be taking into a fight but that is the fickle nature of Chaos. He will either kick ass royally… or crumple at the first hurdle – I love it!