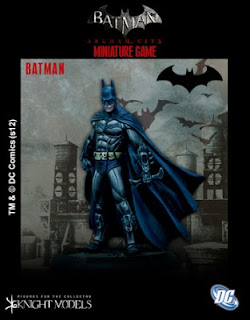 It's the last day at work before the holidays begin, so it's time to start thinking about Christmas projects!

This year's project is based around the new Batman miniatures game from Knight Models. The rules are due in a downloadable format imminently but the first wave of models have been available for a few weeks now. In addition to this there have been some recent sneak peek images of upcoming miniatures, which only add to the excitement.


These initial models seem to based upon the Arkham City (video game) versions of the various characters. However, it has already been hinted that there will be multiple versions of key individuals with different rules – the first example is the (above) Nolan-esque Dark Knight version of Batman.


The models are 35mm, which is slightly larger than we're used to but should provide lots of details. The above photo shows how big some of these models actually are – Bane and Croc in particular look huge!

Anyway, back to my project. 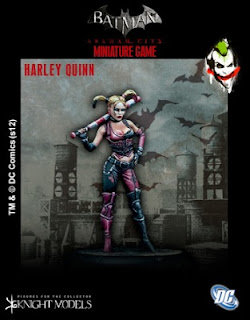 A while back I ordered some of the models – in fact most of the first wave. I liked the Batman and Harley Quinn models in particular, but managed to somehow add the Joker and his gang to my order. Whilst I have no intention to paint all six models during the holiday, it would be nice to get at least one, maybe two complete. 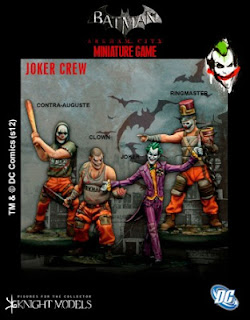 Why so conservative in my goal?
First of all I have to paint some more 40k for my next big game versus Bull's Dark Angels; Secondly I want to get back to a quality paint job, like the Malifaux charity models; Finally, I want to give each model a custom resin base. None of my current bases quite fit the genre, except perhaps my sewer bases, so I want to go to town a little.

From what I've read, sewers play an important role in the Batman game. There are a number of sewer entrance counters placed on the gaming table, allowing players to climb underground and move about unseen. My sewer bases were relatively easy to build, so I could get some new character-specific ones done quickly.

Looking forward to getting stuck in!