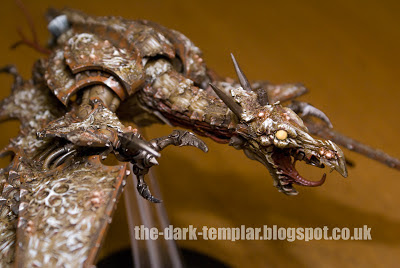 The 1st of February already and our next big 40k game is only 10 days away!

As promised, here's a first proper look at the Nurgle Heldrake mid-paint. I'm several highlights in – to the point of an off-white colour – and just waiting for a final wash to knock them back a bit. You can also see above, the right eyeball basecoated in anticipation of some details. Hoping to go with something rather Lord of the Rings with the eye. 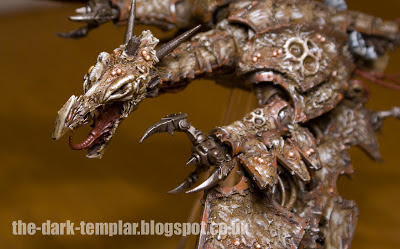 The boils all over the model were painted up with a brown/orange basecoat then highlighted to almost white. I then washed them and the surrounding areas in a thinned orange ink. I need to add a limited amount of red ink to represent inflammation around these areas. 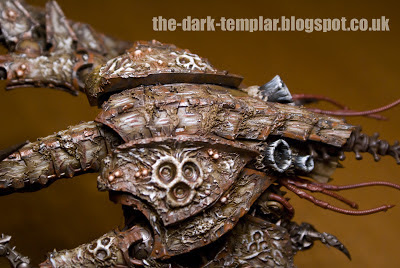 The fungal vents at the back of the model were painted up in exactly the same way as those on Typhus. Privateer Press Cryx Base and Cryx Highlight, both mixed with a little Black and washed in green. I haven't done much to the flesh elements other than give them a Dark Flesh basecoat, plus the tail bone and horns are still brown. 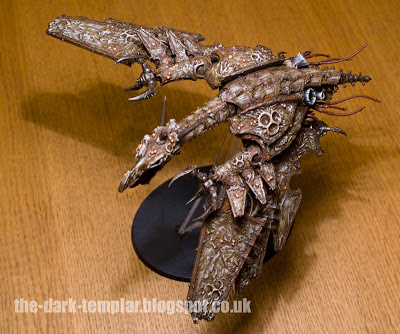 The overall effect is looking good and, once those highlights have been blended in a bit, it should look the business. I've purposefully tried to match the colour schemes used on the Plague Marines so that there is a visual coherency on the battlefield.

Still lots to do but, once complete, this model will serve as the colour guide for all the Nurgle vehicles in my army.