I promised you folks some pretty pictures after a week of musings and I'm kind of delivering today. Progress of my Plague Marines has been slow thanks to real life, but here we are – not sure you could call these guys pretty though. 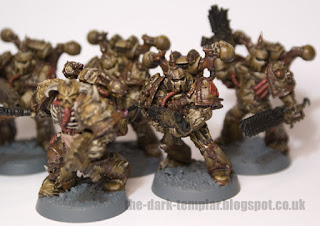 It was during my prep for our latest game that I discovered the lack of finished grunts in this army. I was packing my figures in my case (that I would go on to leave at home on the day) when I noticed how few of my Plague Marines had more than an initial coat of pain on them. Having just spent weeks converting and painting my Nurgle Heldrake and Forgefiend I thought I should stop with the big models and go back to the essentials. 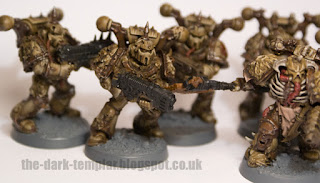 It's funny now that I see these guys photographed up close and personal the paint job looks quite messy when, on the table top, they look rather crisp and defined.

I used my Vallejo English Uniform as the main colour for the armour, accompanied by lashing of GW brown wash (whatever it's called these days) and adding white to the base colour for highlights. The rusted metallic parts were basecoated in GW Scorched Brown with PP Oily Steel and GW Bestial Brown dabbed over it here and there. A final coat of brown wash seals everything in nicely.

Obviously the weapons need looking at but I want to spend some time on them, rather than being an afterthought.

The burning question however is, what colour to do plasma coils and eyes?… green or blue?