So, I've had some thoughts on Daemonic Vehicles and my options for Troops. It's about time I had a think about the people leading this invasion.

Historically (in tournaments) I've always chosen close combat monsters to lead my armies. Bloodthirster and over-powered Prince tag team in my Bezerker army, counter attacking basic Daemon Prince with my Iron Warriors to protect the guns. I never really did the psychic thing and they all had to hit like a tank or psyche opponents out so they tried to avoid them.

Of course the game has changed now and so I'm trying to break my default thinking process. Needless to say, this hasn't worked much so far.

The main thing I have to consider is that a lot of the new Dark Angel characters have "The Hunted" Warlord Trait which means they get extra points for killing your Chaos Warlord. This puts a hefty price on the head of your leader and more than enough to lose you the game if things are close. This does not encourage you to throw your Warlord into combat against anything other than minions – even then some bad dice could cost you the game. It also discourages you from taking anyone other than a combat monster to lead your men – you need him to survive at all costs. However, the flip side of that is you don't want to sink too many points into a character that you're trying to keep out of trouble, in complete conflict with the reason they are there in the first place.

In our most recent game, Bull berated Typhus for sending minions into challenges instead of stepping up himself. Yet, with Belial hitting on a 2+ regardless of Typhus' extra toughness and rerolling for hatred/preferred enemy it wouldn't take more than a couple of bad dice on my part to gift the Dark Angels with 3 extra points, levelling the playing field completely after all my work grabbing the objective. Never going to happen, haha.

But aside from that, what are my choices for HQ? 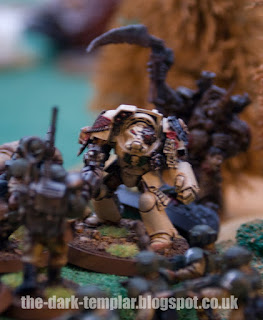 Typhus is the main man when it comes to Plague Marines. At 230 points he's one of the most expensive HQ choices available but you do get your money's worth. He's a Toughness 5 Terminator, which is pretty good. He has a "Feel No Pain Save" and Blight Grenades like the PMs – excellent. He is a Level 2 Nurgle Sorcerer, not bad either. His weapon of choice is the 'Manreaper' – a two-handed power scythe which gives a bonus to strength but strikes last. It's also a daemon weapon which means he rolls for d6 extra attacks (taking a wound himself and if rolling a 1).

Let's be honest, he's a bit of a beast and as safe a pair of hands as you're likely to get. He also provides the option of Plague Zombies, which is not available any other way.

In the games played so far he has been a big threat. He made his reputation in the first game and this carried over to last weekend where, as I've mentioned, he didn't really participate except for a psychic power or two to soften up the enemy. His Terminator armour is an issue because he either having to Deep Strike (too random), ride in a Land Raider (too expensive) or traverse the battlefield on foot (too slow). It is this that prevents him from being an auto include in every list because his inclusion will have a points cost elsewhere in your army – either a Land Raider transport or extra Terminators to take shooting hits when arriving from Deep Strike. He is a solid choice though. 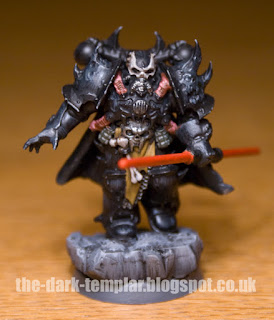 The only other HQ that we've seen to any effect is the Sorcerer. On both occasions he has died in challenges (stupid rule – did I say that before?). He is pretty much a normal marine with an improved weapon skill, an extra wound and a force weapon. I have always spent the points to get him up to a level 3 psycher, giving him as many Biomancy options as possible. This particular school of magic is fantastic, buffing the sorcerer and/or his unit or enfeebling the enemy around him. This has been very successful so far and for his relatively cheap cost he's been a good choice for back up HQ. I'd never take him as Warlord again due to his fragile nature. 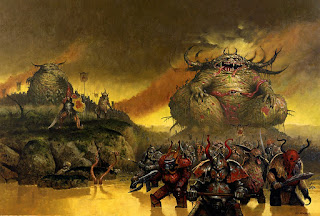 The only other HQ choice I've taken is an allied Great Unclean One. However, as Bull so gleefully reported, he scattered badly when arriving via Deep Strike and played no part in the game that day.

Options not yet used include a Daemon Prince. There are lots of options here, if I can keep a lid on the points cost, so keep one eye on the blog for developments there. I also have the option of a Nurgle Lord on Bike which gives me an equally warm feeling at the prospect. A Toughness 6, fast combat monster – very nice indeed. However, it's going to take something special to dislodge Typhus from the big chair.

Next time – Elite, Fast and Heavy…