After touching upon the impact that Daemonic Vehicles have had thus far, today I'm going to contemplate the Troops.

So far, in my games against Bull's Dark Angels, I have only fielded (technically) four different types of troops. The obvious choice for a Nurgle army is Plague Marines and for good reason. 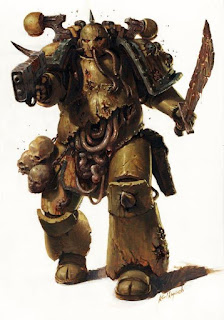 The average Plague Marine is awesome. He's a chaos space marine for starters and comes with all the goodies that this entails. In addition he's tougher than the standard marine and has a proxy-invulnerable "Feel No Pain" save which only S10 weapons will negate – they get this save on top of their armour save so creates a bonus safety net. This means he's not going down easily, unless you picked up the white dice and you're reaping the benefits of the curse (white dice always roll badly for me).

In my opening games of 6th Edition against Bull I have seen the best and the worst of the humble PM. I  witnessed four turns of shooting from an entire 1000 point Dark Angel force virtually shrugged off by a 7-man unit, and saw it's sibling unit drop in one turn of heavy plasma hits. The dice can be fickle for sure.

They also have poisoned knives, so in combat will never need more than a 4+ to wound an opponent. Add that to an extra close combat weapon and they look sweet in combat. Their ability to take two special weapons regardless of unit size makes them pretty sweet in the shooting phase too.

The only drawback is their cost. Throwing seven guys, a couple of plasma guns and a champion with power weapon into an armoured Rhino can get pricey. Want a second unit and your points are disappearing rather quickly. 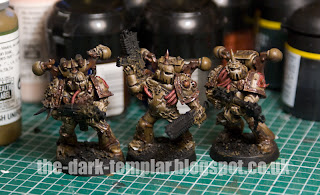 Despite the alternatives, I can never see myself not including at least one unit of these guys, they are pretty reliable on the field, frighten the enemy… and they look so cool.

Then you have your standard Chaos Space Marine. I've taken the odd unit of unmarked Iron Warriors in my games so far as support for the Plague Marines. You can get a small unit together in a Rhino for a reasonably cheap price, but start upgrading and you're better off taking PM. 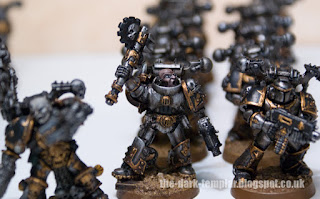 The issue here is that Chaos Marines struggle to find a role. They're ok at shooting and ok in combat (better than their Imperial cousins) but you need 10 to take a heavy weapon and can't split the unit into smaller 5-man squads. Because the Chaos Champion has to declare a challenge in combat (stupid rule) you're likely to lose any power weapons quite quickly if facing Initiative 5 characters. What I find them most useful for is this support role I mentioned. They often follow the Plague Marines and jump in to add weight of numbers or weight of fire. Just as the enemy is turning the tide against the Plaguies, another wave of troops arrive to tip the balance back again.

I have never found the desire to make them Nurgle marines as the points cost for T5 seems a waste. They get none of the extra goodies that the PMs do, so better to keep them cheap. The surprise of the latest Chaos Codex has been Chaos Cultists, or in my case their Plague Zombie variant thanks to Typhus. Having a Fearless horde unit with a "Feel No Pain" save is awesome. They are the ultimate tar pit unit in my experience and can, over time, take down most enemy through weight of numbers. In my first game against Bull a unit of 30+ zombies managed to kill Belial and a 5-man unit of Deathwing Terminators – that's less than 150 points taking out almost 500 points worth of enemy. In the most recent game I didn't position them very well but they managed to draw fire from several Dark Angel units – fire that wasn't targeting my light vehicles. They didn't accomplish very much on that occasion other than a big distraction. Still valuable though.

Their big downfall is their lack of pace. They're "Slow" so can't move more than 6" a turn unless charging into combat. This means that if you position them poorly then you will struggle to recover. They're not that great once in combat, certainly once their numbers are thinned out. However, as a Troop choice they could hold objectives and tie up enemy units, at least until support arrives. 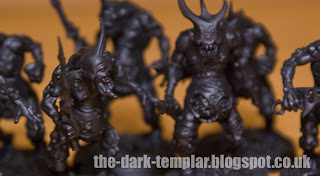 I have also taken Plaguebearers as part of an allied Daemon detachment. I have to say that, despite having a poisoned blade and "Feel No Pain" like the Plague Marines, these guys were pretty awful. I had a unit of 14 attack a 10-man devastator squad and they struggled, needing support from a Helbrute to truly make combat decisive. They're "Slow" too which compounds my problem with them. If it wasn't for the fact that I have to take a Troop choice in order to include any allies (and the Daemons have some great units) I wouldn't imagine these models appearing on a list again. For the cost I would rather spend the points elsewhere – which is a shame because I really like the models!

As for other options, I haven't tried any Nurgle or unmarked Cultists. They would be faster than the zombies and possibly more effective in combat with the extra attack, but not being fearless would be an issue. They are just so cheap though it might be worth a go!

You can create a pretty authentic Nurgle list, especially if Typhus is on the table opening up the option of zombies. The addition of the Cultists has opened up cheaper alternatives to the cult troops and standard marines. I like a balanced approach, not going overboard on any one type, and that will probably continue.