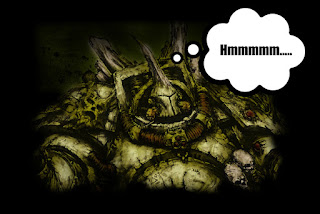 Bull is having a period of thoughtful contemplation after the weekend's battle about his new Dark Angels so I thought I'd join in.

Typhus' invasion force remains unbeaten so far (just about) after three games of 6th Edition against the Imperials. As you would expect, some units have excelled, some have been downright awful and some are just about holding their own. We've had zombies, possessed vehicles and daemons making up the numbers so it's time to pick out the wheat from the chaff and make some decisions for moving forward.


In terms of points cost versus effectiveness there have been two stand-out units. 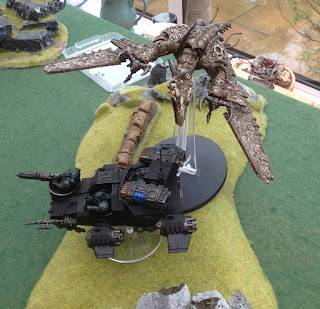 The Heldrake is turning into a recurring nightmare for Bull, so much so he had sworn to auto-include the quad-gun in his lists from now on. The Baleflamer is simply death incarnate for any marine unit in the area – burning Dark Angel armour is a beautiful thing to behold, the contrast between the green and warm hues of the flames is very calming. The meteoric strikes have only been used against light vehicles so far, with pretty decent results, but means that the flyer gets to attack two different units a turn whilst still moving 18+" a turn. The quad-gun is a real problem and old Helly only survived by the skin of his teeth on the turn he appeared. The daemonic invulnerable save is essential to his survival, though I haven't managed any successful "It will not die" rolls yet – had that come off he would have inflicted even more death!

The only question over this model is whether to (a) leave it at home and throw a spanner in Bull's plans, or (b) bring two of them!!

There is an alternative solution which involves bringing a Daemon Prince with Wings and the funky Flamer daemonic weapon. It turns him into a proxy-Heldrake who can tag-team with the big guy and become quite an unstoppable team (if on the expensive side). 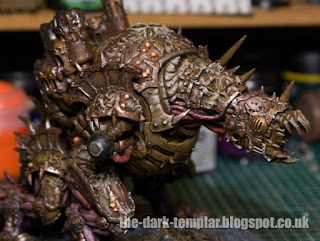 The Forgefiend had certainly made me eat my hat. When I first saw the model I wasn't terribly impressed and was given the model as a present – I didn't intend to buy him myself. The model itself has grown on me tremendously, helped in no small part by me hacking it up and adding heaps of greenstuff. 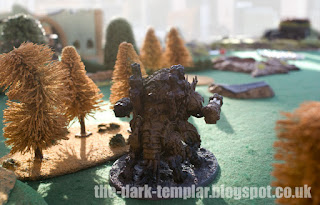 In a similar way to the Heldrake, the 'fiend has been a solid player on the field of battle. He is only armour 12 but his daemonic defences have ensured his survival thus far. I have always sent him out with the Hades Cannons – eight strength 8 shots are not to be sniffed at. Whilst his BS of 3 means he's not as effective as he might be, it does mean that whatever he shoots at is likely to take some damage – even snap-shooting at flyers!

I'm not likely to drop this guy from the team sheet, but the question is whether I should lose something else in order to fit a second into the lineup. 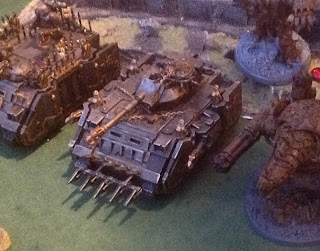 In addition to those beasties, the humble Predator – workhorse of many a tournament army – has been used as a Daemonic Vehicle in the past. Previously this simply meant they could ignore Stunned and Shaken results on the damage take which for a long range shooting threat was great. The upgrade has changed now and not only requires a 2+ roll to ignore said damage, but also reduces the BS of the vehicle to 3. Thus far in our games, Bull has ignored the Predator on the table – there's been juicier targets – so the added protection doesn't warrant the reduced effectiveness or the to my mind.

An alternative approach would be to go old school and bin all my daemonic vehicles and stack up with regular Predators. Lots to contemplate.