Spirits in the Material World… 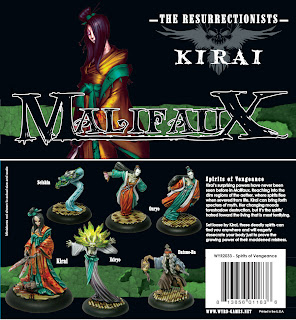 Yesterday was noted by the first game of Malifaux of 2012. I did well, I think, to stick to my rule of only Guild in 2011 and held off playing my Kirai crew (that I've had for some time now).

It is 2011 no longer so I jumped straight in, throwing off my Guild allegiance and fielded Kirai's Ressurectionist spirits against Fug's fledgling Lilith crew.

All I can say is wow – you can do all the reading you like, but it doesn't prepare you for actually playing the crew in a game. It was always going to be a slow affair, and we had limited time, so the game lasted 4 turns.

Strategy was Shared Contain Power. Fugs chose a couple of Neverborn specific Schemes (including one that involved Blood Counters, before he realised that Spirits don't drop any kind of counter). I chose Grudge and Kill Protegee, on the Mature Nephilim and a Younger. My opening crew consisted of Kirai and her Totem, Datsu-Ba, Shikome and five Seishin. 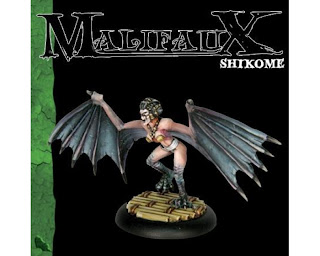 I won't bore you all with details at this stage. I had a vague plan, but it didn't last long. I was amazed at how fast Kirai can be – I even allowed Lilith to switch her at one stage. She managed to fly around the board with ease. Kirai won the game 4-2 but it wasn't representative of the game – we both stumbled around the new crew and played to learn.

I had problems with card suits as, depending on which spell or ability you want to use, you can need any one of the 4 suits in a deck. My crew also didn't inflict a lot of damage but, aside from an Ikiryo, a couple of Seishin and later on Datsu-Ba, I didn't lose too many models either. I struggled with a lack of Seishin later on – which is a worry as we only played 4 turns – but this was largely due to Kirai being too far away from combat when things died, thus not generating any new ones.

I have to say though that, whilst yesterday felt like riding a train that wasn't quite on the tracks properly, the possibilities for this crew are very exciting. I already have some Hanged and Gaki waiting in the wings, with Insidious Madness and maybe even the Dead Rider on the wanted list.

With another game booked in for Tuesday this week I have a lot to think about. I was quite overwhelmed by the crew yesterday, so I may reduce the variety of model and abilities I have to remember in my opening few games.

Any Kirai veterans who want to throw any gems of experience into the ring please do share.